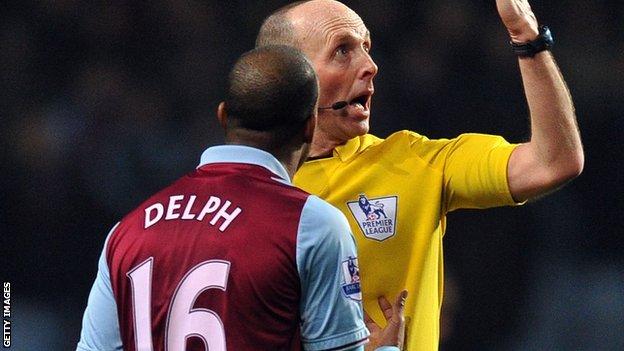 Aston Villa midfielder Fabian Delph is unhappy at being banned for two important relegation fixtures as a result of some "shocking" bookings.

Delph received a two-match ban for his 10th yellow card of the season, after a handball late on in

He now misses the games against Villa's relegation rivals Reading and QPR.

"I've got 10 yellow cards and deserved maybe only four. Some of the bookings have been shocking," he told BBC WM.

"I believe Aston Villa are a good team. I think they can stay up.

"Their problem is they have young players. But, if they can stay in the Premier League, they can enjoy a good season next year.

"When you are a young team, you can have some problems. But, after a year they can improve.

"I like Christian Benteke, Charles N'Zogbia and Andreas Weimann."

Manchester City manager Roberto Mancini on his belief that Paul Lambert's young Aston Villa side can beat the drop.

Since being recalled to the Villa starting line-up on Boxing Day, Delph has played in 11 of his side's last 14 games, but has now been booked in seven of them.

"The one I got against Arsenal I was in shock," he added. "I'm not a player that cheats.

"The ref said on Monday night that I've meant to handball it, but I honestly did not mean to.

"Obviously I'm disappointed," added Delph, in his fourth season at Villa Park following a seven-figure move from Leeds United in 2009.

"I've just started to get a run in the team and I want to do my best, instead of which I'll be sat, being a nervous wreck, watching.

"The next two games are pivotal. We're aiming for six points. But there's other midfielders that will step in and do the job."

With 10 games left, Villa remain in the bottom three and travel to Reading on Saturday before playing QPR at home seven days later,

Fabian Delph's worst disciplinary run as a professional footballer came in his first full season with Leeds United, when he picked up 13 bookings. But he has never been sent off.

But Lambert took comfort from the fact it took an unforced error by captain Ciaran Clark to settle the meeting with the reigning Premier League champions.

"We were in the game," he said. "I wouldn't have minded if someone had put one in the top corner with a bit of skill. But it's a mistake by us.

"The next two games are massive for us but, if we play like that, we'll give teams a fright, that's for sure."

Clark also appeared to be fouled by Edin Dzeko in the incident that created the visitors' late first-half winning goal from Carlos Tevez, twice City's hero, having earlier cleared a header off the line from Christian Benteke.

But Clark had the backing of the Villa dressing room.

"Ciaran Clark's only going to come back better for that mistake," added Delph. "After that, he was terrific.

"He's been brilliant all season, he's a great captain and he'll come back stronger."