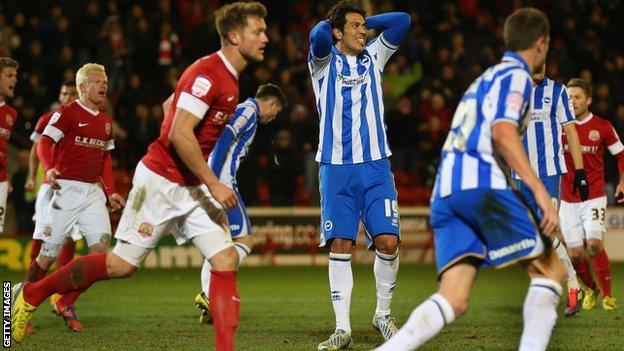 Luke Steele saved a late penalty as Barnsley moved out of the relegation zone while Brighton's play-off hopes suffered another blow at Oakwell.

Barnsley, who started the night bottom, were ahead in the 16th minute thanks to striker Jason Scotland.

Leonardo Ulloa headed the Seagulls level on the hour but Chris Dagnall restored Barnsley's lead from the spot.

Striker Ulloa had a chance to equalise for the second time in the 83rd minute but Steele kept out his penalty.

Barnsley are now two points above the bottom three with a game in hand while Brighton missed the opportunity to reclaim the final play-off position.

David Flitcroft's side quickly shrugged off their FA Cup drubbing to Manchester City at the weekend, when Scotland held off Adam El-Abd's challenge to fire Barnsley into an early lead.

Jacob Mellis almost doubled their advantage with a powerful free-kick that was deflected wide.

Brighton improved in the second half and were level when Inigo Calderon's cross picked out an unmarked Ulloa to head past Steele.

Barnsley restored their lead in the 65th minute when El-Abd pulled back Dagnall in the box before the striker tucked away the penalty.

The visitors went close to an equaliser when Kazenga LuaLua was denied by Steele while Liam Bridcutt blazed over from close range.

But Ullua wasted the best chance from the spot after David Perkins fouled Calderon - Steele palming away the Argentine's shot.

Barnsley manager David Flitcroft: "I am very proud, we have set a team up to battle and they have done that in the first half.

"I have got massive respect for Brighton in terms of the football they play. I am a massive Brighton fan in terms of that. We got schooled down there earlier in the season and that was one of the worst trips I have had.

"But I am delighted because the game plan we set out has worked. We didn't let them play with any freedom or fluidity and I don't think any of their players would have enjoyed playing here."

Brighton manager Gus Poyet: "We knew we would have to fight and compete and I got the feeling that we gave the game away with the goals that we gave away, but that is how it has been for a while so I am not surprised.

"Unfortunately I am getting used to this, we have played three games away from home in a week. The first game was terrible, then we were by far the better team at Bolton and lost 1-0 and today if anyone said Barnsley deserved to win then I should retire.

"The good thing is the only people to blame is ourselves. It's not the opposition, the pitch, the referee or the weather. We have another nine games and we'll see. We'll try our best."