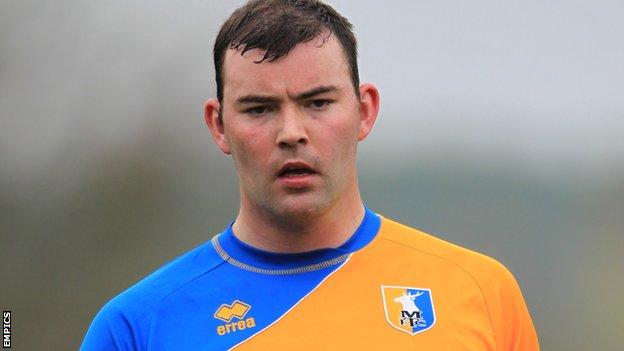 Matt Rhead's header set Mansfield on their way to a club-record eighth straight victory as they beat Grimsby.

After Matt Green had an early chance for the Stags, Grimsby's Ross Hannah forced a great save from Alan Marriott.

The Mansfield goalkeeper denied former Stags defender Tom Naylor with another wonder save after the break, before Rhead headed the home side ahead.

Adam Chapman, who scored a hat-trick on his debut on Saturday, secured the win with a left-footed 25-yard screamer.

"The lads deserve all the plaudits that come their way. They are working extremely hard. It's fine lines between the top five and six in this league.

"I don't think we played particularly well when we had the ball. But our shape and desire to get the thing back and our defending was excellent and Alan Marriott was in inspired form.

"Adam Chapman is such a talented footballer. He is only been with us a week or so. He has acquitted himself really well but there is more to come. He is so technically gifted."

"Yes, the performance was spot-on. I thought we were the better team.

"I thought we dominated the first half and in the second half I still thought we were the better side. We limited them to very little.

"I thought we passed it quite well on a heavy surface but you have to deal with these things.

"What gives us hope and happy is not the right word, but to be talking after a defeat it's probably as happy as you're going to find us."