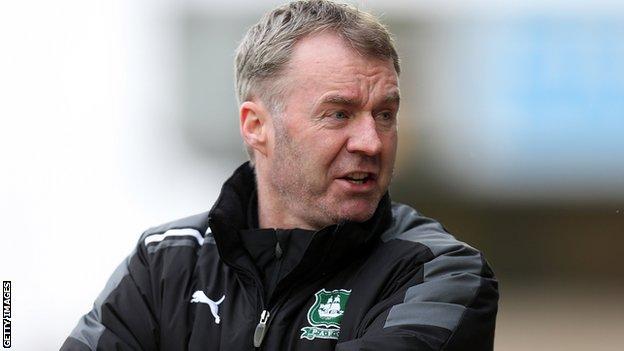 Plymouth Argyle manager John Sheridan has praised the character of his team after they came back from a goal down to beat relegation rivals Barnet.

The 2-1 win lifted Argyle off the foot of League Two on goal difference.

"It's a great feeling when you go a goal down and have the character and courage to come back," Sheridan said.

"They've had some good results in the last six games and played teams off the park, but I felt we played them off the park at times," he added.

Plymouth, who dropped to the bottom of the table for the first time last week, are now just one point off safety with 11 games still to play.

"I was nervous before the game but I don't think the players showed it," Sheridan told BBC Radio Devon.

"We knew what was at stake and the players had to get three points," he added.

The 21-year-old scored his first goal since joining the Pilgrims in January as he hit a second-half winner.

"He's a very intelligent footballer, I like him as a footballer and I think the formation suited him a little bit.

"We passed it and played to his strengths.

"He's been in and out of the team, but trained hard and his attitude's been 100% and I'm pleased he scored the winning goal."