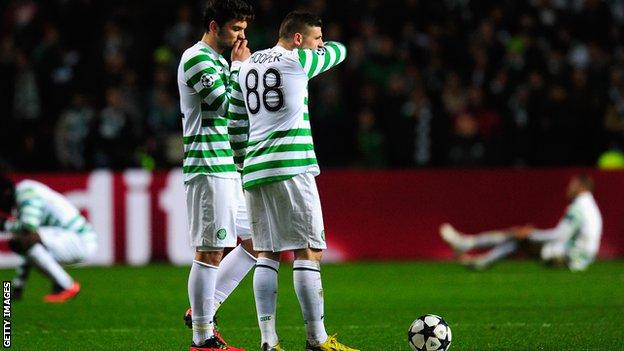 Trailing Juventus 3-0 after the first leg of their Champions League last-16 tie, the challenge is more daunting than a lung-bursting run up through the Alps with a backpack full of gold.

Nevertheless, Neil Lennon's side will face the Italians in Turin on Wednesday hoping for a minor miracle.

History, though, is not on their side: the closest they've come to overturning a 3-0 deficit or worse was the nerve-shredding ties against Artmedia Bratislavia in 2005.

Thumped 5-0 in the first leg in Gordon Strachan's first game in charge, they won 4-0 in Glasgow and failed to progress.

Against Juventus in Glasgow three weeks ago, Celtic were shorn of the talismanic presence of Georgios Samaras.

The galloping Greek has reserved some of his most impressive displays for the Champions League: scoring five goals during Celtic's run to the last 16.

His return offers a sliver of hope.

The Greek nodded home the second goal in the 2-0 third qualifying round victory against Helsinki and was also on target in the play-off win over Helsingborgs.

And in the group stages, Samaras found the net in the 3-2 win away to Spartak Moscow and the 2-1 away defeats by Barcelona and Benfica.

Against a Juventus defence that dealt fairly comfortably with Celtic's sporadic attacks, the returning James Forrest failed to trouble the backline.

However, Lennon will hope that the pace of Forrest and Samaras will provide the Italians with a sterner test on Wednesday and provide ammunition for Gary Hooper up front.

The return of Anthony Stokes also poses something of a selection poser. Stokes has impressed since returning from injury and his presence could make Celtic a more menacing proposition going forward.

Does Lennon field Stokes alongside Hooper or play Kris Commons just off the Englishman?

Celtic will be without injured captain Scott Brown, who continues to struggle with a hip problem.

The combative former Hibs midfielder locked horns with Andrea Pirlo in the first leg and Lennon will look to replace his industry with Wales international Joe Ledley.

Ledley, Victor Wanyama, Samaras and Charlie Mulgrew appear the likeliest to man the midfield barricades, with Beram Kayal once again cooling his heels on the bench.

"We want to make it look like the scoreline at Celtic Park was a little bit flattering to Juventus," said Lennon.

"We felt there wasn't that much between the teams although they did have a lot of class in their side.

"We'd like to go, compete and try to win the tie."

Some "robust" marking in the first leg frustrated Celtic and resulted in Lennon seeking clarification on what's acceptable at set-pieces.

The players, to an extent, lost focus with the pushing in the box and Juventus retained their composure to take their chances when they arrived.

Juve, with 59 points, are six clear of Napoli at the top of Serie A, and drew 1-1 in Naples on Friday with captain Giorgio Chiellini making a scoring return from injury.

The Bianconeri, unbeaten in this season's Champions League, took the sting out of Celtic in the first leg with the midfield trio of Pirlo, Vidal and Marchisio on hand to relieve pressure on the back three of Barzagli, Bonucci and Caceres.

The Uruguayan Caceres made way for Chiellini in the draw with Napoli and it remains to be seen whether he will return against Celtic.

"We're in the Champions League this year, which demands a lot of physical and mental energy," said Juve manager Antonio Conte.

"We have to stay on our toes because everyone will have to play their part all the way until the end.

"We want to retain the Scudetto and continue to keep the Champions League dream alive.

"We play Celtic on Wednesday and start with a 3-0 lead, but I'm not relaxed and won't be until the final whistle."

Caine's Italian Job had the audience on the edge of their seats with a cliff-hanging conclusion; it remains to be seen whether Celtic strike gold too.