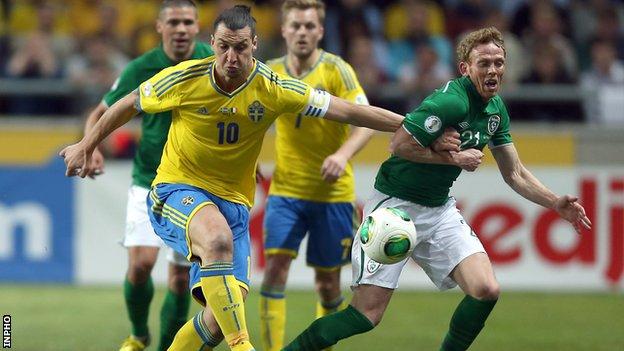 The Republic of Ireland kept their World Cup qualification hopes very much on track as they earned a merited draw against Sweden in Friday's qualifier.

The Republic picked up the pace midway through the second half before Forde denied Rasmus Elm late on.

The result drops the Irish to fourth in Group C on goal difference following Austria's win over Faroe Islands.

However, they remain just a point behind second-placed Sweden with Austria to come at home on Tuesday.

Wigan star McCarthy seemed determined to justify his selection reprieve as he linked up superbly with McClean down the Irish left flank before the Sunderland winger's dangerous cross was cut out by Jonas Olsson as Walters appeared set to pounce.

The third of the Republic's early corners went straight to unmarked skipper Keane in the seventh minute but the LA Galaxy veteran completely failed to connect with McClean's deep delivery.

Three minutes later, the composed McCarthy played in a charging Long but, after jinking his way to the edge of the Swedish box, the West Brom striker blazed over with only keeper Andreas Isaksson to beat.

Irish fans must have feared that the missed early chances could come back to haunt Trapattoni's side but it was an encouraging opening after the struggles of the qualifying campaign to date.

The ball-playing ability of full-backs Seamus Coleman and Marc Wilson was giving the Republic improved offensive options with much-criticised midfielder Paul Green providing the defensive shield which Trapattoni had demanded.

The purposeful McCarthy threatened to combine again with the overlapping McClean in the 16th minute but the Wigan player's ball was over-hit.

As the Swedes finally began to look threatening, Forde had to make the first of his smart saves in the 22nd minute as he plucked Hysen's volley out of the air after the hitherto quiet Zlatan Ibrahimovic had out-jumped Ciaran Clark in the air.

The Millwall keeper, playing his first competitive game for the Irish, made an even better save three minutes later as he dived full length to push away Granqvist's glancing header after a Kim Kallstrom free-kick.

After their impressive first-half display, the Republic's play became a tad scrappy in the third quarter before the visitors picked up the pace midway through the second period as Keane was unlucky to lose possession after beating the offside trap in the 69th minute.

Trapattoni's late changes included the introduction of Wes Hoolahan for tiring skipper Keane and the Norwich man did enough to suggest that he should be in the manager's thinking for a start against the Austrians on Tuesday.

Right at the death, the Swedes almost snatched an undeserved victory but the impressive Forde stood firm to push out Elm's deflected drive out for a corner.

As for the Swedish superstar Ibrahimovic, he had scarcely been a factor in the contest with Republic playmaker McCarthy - a player who hadn't even been in Trapattoni's original team selection - battling it out for the man of the match honours with several other Republic players.