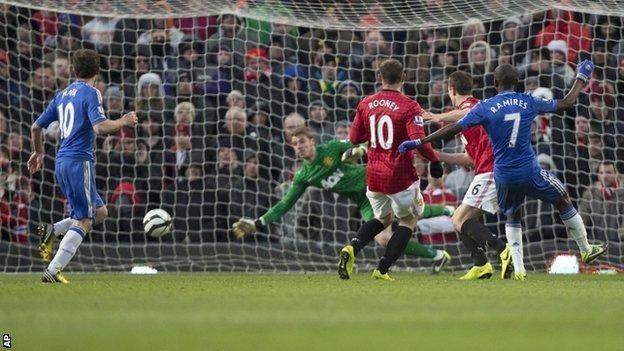 United looked on course to get some consolation for their midweek Champions League exit against Real Madrid as early goals from Javier Hernandez and the recalled Wayne Rooney put them in complete control.

A place in the semi-final looked a formality as Chelsea struggled to make any impression - only for the second half to see a complete transformation in fortunes.

Chelsea interim manager Rafael Benitez once again felt the full fury of his own supporters when he replaced Frank Lampard and Victor Moses with Eden Hazard and Jon Obi Mikel not long after the restart.

The taunts were silenced by Hazard's superb strike just before the hour and another fine finish from Ramires soon after as Chelsea were revived in the most dramatic fashion.

And, as an enthralling tie reached its conclusion, Chelsea looked far more likely to secure a place in the FA Cup semi-finals and it took a save with his feet from United keeper David de Gea from Juan Mata a minute from time to deprive Benitez's side of victory.

Chelsea's fans celebrated the draw at the final whistle and Benitez will have been delighted by the spirit, resilience and quality shown by his side, who can now approach the replay at Stamford Bridge with optimism as Manchester City await the winners at Wembley in the last four.

Rooney was restored to United's starting line-up after being dropped against Real Madrid with Van Persie moving down to the role of substitute - and it was almost inevitable he would have an impact on the early events that saw United take command.

United were ahead after five minutes with a goal that owed almost as much to its creator Michael Carrick as goalscorer Hernandez.

The England midfielder showed wonderful vision with a long, angled pass into the area that left Chelsea keeper Petr Cech in two minds, but it still required clever movement and a fine header from Hernandez to score.

It was exactly what Benitez did not want and things got worse for Chelsea seven minutes later as United doubled their lead when Rooney's floated free-kick evaded all the bodies inside the area and Cech to drift in at the far post.

As Chelsea suffered this nightmare opening phase, captain John Terry could only watch from the sidelines as Benitez once again chose to leave him on the bench.

Chelsea, understandably, were pushed on to the back foot by the speed of United's start and almost fell further behind only for Cech to block Rooney from 10 yards and then produce great athleticism to save David Luiz's header from the rebound as it looked bound for the top corner.

As the half progressed, Chelsea settled and enjoyed more possession but failed to make the most of promising positions with either poor delivery or wayward finishing.

Chelsea made no impression on United early in the second half, prompting Benitez to remove Lampard and Moses for Hazard and Mikel.

"Chelsea looked vulnerable at the back in the first half but the problem was in their midfield, not in their defence. That changed in the second half. For starters Chelsea were a lot more compact in the middle of the pitch and they did not allow United the same amount of space.

"Eden Hazard was the key to their comeback, though. His pace and penetration meant he contributed more on his own than Chelsea's three attacking midfielders had managed between them before he came on."

The changes were greeted with jeers from Chelsea's supporters as they chanted "You don't know what you're doing" and "We want our Chelsea back" in the direction of Benitez.

And yet it was Hazard who brought Chelsea back into the game with a wonderful goal on the hour, using Rafael as a shield before curling a finish beyond United keeper De Gea.

The shift in momentum was enough to prompt Ferguson to replace Hernandez with Van Persie but Chelsea were really back in business after 67 minutes as they completed the turnaround.

Chelsea found space as they broke on United and when Oscar found Ramires, his Brazilian compatriot showed great composure to turn inside and send a precise left-foot finish into De Gea's bottom corner.

The emphasis had shifted completely with Chelsea looking the more likely winners and it was only a vital touch from De Gea's right-foot that stopped Mata giving Benitez's side the victory.

The Spaniard then saved again from Hazard as United end looking ragged and hanging on.