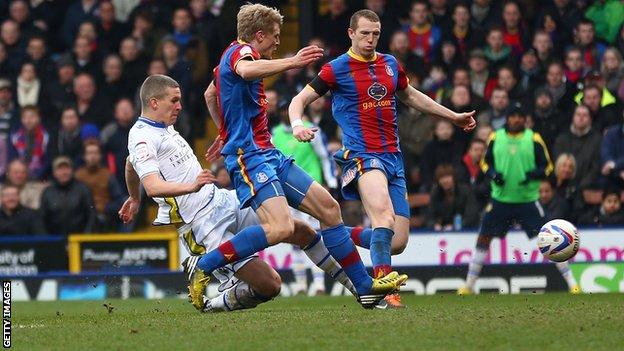 Murray, the country's leading scorer, headed the Eagles into the lead but Steve Morison's close-range effort levelled the scores after the break.

Morison then put Leeds into a surprise lead after running on to keeper Paddy Kenny's long clearance.

But Murray extended Palace's unbeaten home run to 18 games when he lashed in to take his tally for the season to 30.

Leeds had come close to their first win on the road in eight games but the point edged Palace closer to second-placed Watford in the table following the Hornets's home defeat by Blackpool.

A one-sided first-half gave little indication that United manager Neil Warnock would come so close to inflicting defeat on the club he led to the Championship play-offs in a two and-a-half year spell in charge.

Kenny had already denied Murray twice before the striker ghosted in between two defenders to head home a cross from Jonathan Williams at the far post.

Murray volleyed wide before the break but Leeds showed signs of life in the first-half's closing stages when Luke Varney had a shot cleared off the line by Mile Jedinak.

Varney set up Morison for the equaliser on 56 minutes, his cross eluding the defence and the recent signing from Norwich finished from close range.

Leeds then stunned the majority of fans inside Selhurst Park by taking the lead in direct fashion when a Kenny clearance was allowed to bounce through to Morison, who tucked the ball past Palace keeper Julian Speroni.

Palace gathered themselves despite the shock of going behind, and were grateful that Murray's season-long form continued when he knocked Damien Delaney's cross past Kenny to help claim a valuable point.

Crystal Palace manager Ian Holloway: "I felt some of the decisions had a huge bearing on the game - I thought I saw Luke Varney foul Johnnie Williams from behind, a blatant yellow card.

"Two minutes later Varney dived and got given a yellow card, and he should have been off.

"Then two minutes later, Wilfried Zaha goes straight through and gets scythed down and (Stephen Warnock) gets a yellow - if that's not a goalscoring opportunity I don't know what the rules are."

Leeds United manager Neil Warnock: "Palace are a good team, I hope they go up.

"But I don't see Holloway complaining with a couple of decisions in the first half. They're used to winning here but they didn't deserve to win today.

"I think Morison has been good since he's been here, it's what he puts into the team. He's a team player."