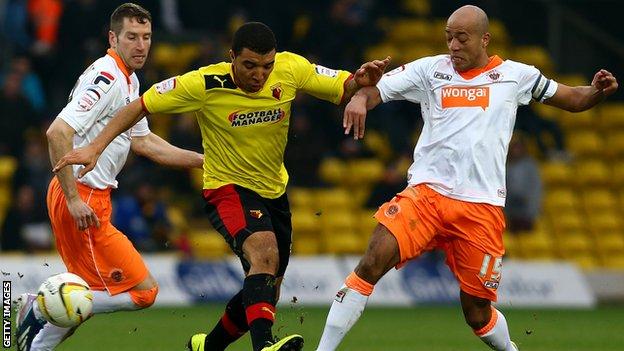 Blackpool scored two late goals at Watford to give Paul Ince his first win in five games since becoming the Tangerines's manager on 18 February.

Blackpool grew in confidence after the break and Tom Ince steered the ball in for a deserved equaliser from close in.

Gary MacKenzie then pounced on a loose ball from an Ince corner late on to end Watford's unbeaten run of seven games.

With Cardiff City out of action this weekend, Hornets manager Gianfranco Zola was left to rue several missed chances that, had they been taken, would have moved the Hornets closer to the Championship leaders. Instead, they ended the day still five points adrift in second place.

The home side were also aggrieved that referee Andrew Madley waved away strong penalty claims from Daniel Pudil and Troy Deeney in the first half.

Despite Jonathan Hogg missing a chance to open the scoring early on, Watford took a deserved lead through Battocchio on 27 minutes, who lifted the ball over Matt Gilks after latching onto a through ball from Deeney.

Fine saves from Jonathan Bond before half-time kept Watford ahead, the keeper pushing an Ince shot around the post before clawing a looping Matt Derbyshire header away to safety.

Battocchio fired wide after the break and Watford were left to regret Matthew Briggs's glaring missed header at the back post when Blackpool levelled with 14 minutes remaining.

Stephen Crainey crossed from the left wing, and Ince ghosted in at the near post to glance the ball across Bond into the far corner.

Worse was to follow for Watford with only two minutes left when they failed to clear Ince's corner, MacKenzie keeping his head in a crowded penalty area to secure an important three points.

Watford manager Gianfranco Zola: "It was one of those days that has been made like it is by one man on the pitch today - and he wasn't wearing a yellow or an orange shirt.

"But today he's made a difference and I feel so upset, not because of him but because of my players, because they didn't deserve to lose a game like this."

Blackpool manager Paul Ince: "We didn't drop our heads and we kept believing we could get back into the game and that's a credit to the players.

"Towards the back end of the first half we looked like we were going to get a goal back, we played some lovely football and in the second half it was more of the same.

"If you can get the next goal, they'll get a little bit apprehensive because of where they are in the league - and it proved right."