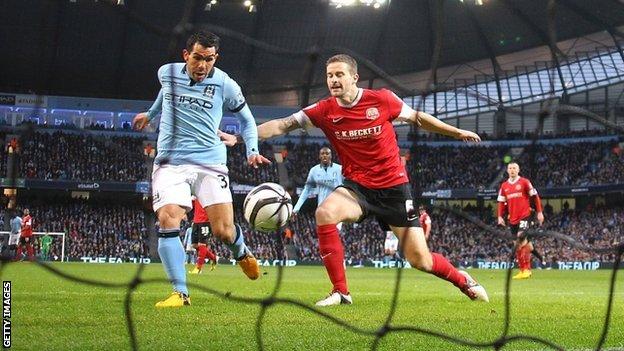 The Argentine striker, who was arrested on suspicion of motoring offences on Thursday, did not allow his off-field problems to distract him as he helped City brush aside their struggling Championship opponents.

Tevez scored three goals and made two more in a one-sided contest where the gulf in class between the Premier League champions and the team at the bottom of the Championship was always apparent.

City's title defence remains on the rocks, but the 2011 Cup winners will return to Wembley next month full of confidence after strolling into the last four of a competition that provides their only realistic chance of silverware this season.

From the start, City were too quick and too clever for the Tykes, who played with a packed defence but were often left chasing shadows.

Barnsley boss David Flitcroft and his players were hoping for a repeat of their famous wins over Liverpool and Chelsea on the way to the semi-finals in 2008 but in reality never came close to pulling off another shock.

City took the lead after 11 minutes when Barnsley's defenders failed to read Yaya Toure's clever chipped pass and Tevez mopped up from close range after David Silva volleyed against the post.

Barnsley were working hard just to contain their hosts but that strategy collapsed with two goals in four minutes either side of the half-hour mark.

Tevez escaped down the right to send in a low cross that found Aleksandar Kolarov arriving late to bury a skidding first-time finish.

"It is his problem, it is not our problem. Will it affect Carlos? No, no, no. If it has this effect on him then I hope the police can stop him every day.

And Kolarov turned provider soon after, with his delivery helped on by Silva for Tevez to turn and slam his shot past helpless Barnsley keeper Luke Steele from close range.

By now, City's fans were singing about going to Wembley and Tevez made sure that they would be making that trip when he completed his hat-trick four minutes after the break.

Samir Nasri advanced down the left by-line and pulled the ball back for Tevez to coolly sweep it into the opposite corner of the net.

Roberto Mancini's men were so dominant it took Barnsley close to an hour to bring a meaningful save from Costel Pantilimon, with substitute Jacob Mellis firing in a dipping shot that had the giant City keeper scrambling to his left.

City have not conceded a goal in the FA Cup this season, but Pantilimon had to do some more work to preserve that record, denying Ryan Tunnicliffe with his foot after the on-loan Manchester United midfielder surged clear.

But City still looked capable of scoring at will and increased their advantage with their next attack, which was started on the halfway line by Silva.

The Spaniard finished the move too, seeing his initial shot saved by Steele but following up to convert the rebound himself.

Barnsley's fans kept singing until the bitter end but their season now reverts to a relegation battle.

For City, what has been a disappointing campaign in the Premier League and Europe could still end with them lifting a trophy in May.

"It is important that he continues to score because we need his goals in this period of the season, and also for the FA Cup.

"I don't know what will happen in the summer. Carlos has another year on his contract but many times he has said he wants to go back to Argentina."

"It is his power and his explosion and his movement which is incredible. He is a ghost.

"After the game, our players have spoken about getting close to him in the box and what they are saying is that he just pulls off and then produces a shot on target which is a goal.

"But I was impressed with all of City's players. They are a team that has everything. We tried to get in them and around them and tried to get near them and we couldn't."