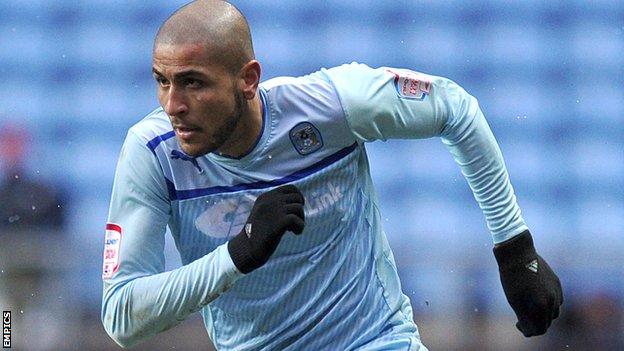 Akpo Sodje headed the Iron in front, but Carl Baker levelled on half-time.

Leon Clarke, who scored 11 times in 15 games during a loan spell at Scunthorpe earlier in the season, then nodded in the winner 13 minutes from time.

Karl Hawley hit a post, then Coventry keeper Joe Murphy saved from Jimmy Ryan to deny the home side an equaliser.

Coventry's fifth successive away win was their 11th in the league this season - a new club record.

now faces his first two home tests at the Ricoh Arena, against Colchester United in midweek, then Hartlepool next Saturday.

And his first big challenge is to put right Coventry's home form.

Although the Sky Blues are soaring on their travels, they have lost their last four at the Ricoh.

"It was the one major decision to be made - whether their centre-half stays on the park when he's actually chopped Andy Barcham across the neck, which is a clear one.

"Everybody has seen that it should have been a sending off. That could have changed the game completely. It was a major talking point and the referee got it wrong.

"Just as the game was opening up we took some wrong choices. We tried to be creative by going diagonal from 60-yard passes. They were getting cut out and I don't like that. Keep the game short, keep it simple as we did in the first half, and it opened them up."

"The great thing from my perspective is that from going a goal down the response was magnificent.

"I said to them that if I get that out of them every week we've got a real chance at this football club. Their character was outstanding on what was a difficult afternoon on the surface.

"I thought they were outstanding. All in all it was magnificent. There's a lot more to come from this team. We can improve as a team. That's what excites me. It was a wonderful afternoon's work from the players.

"It's a good two and half hours back down the road for our fans. They created an intensity to the game, and I'm delighted for them that we provided such a good performance."