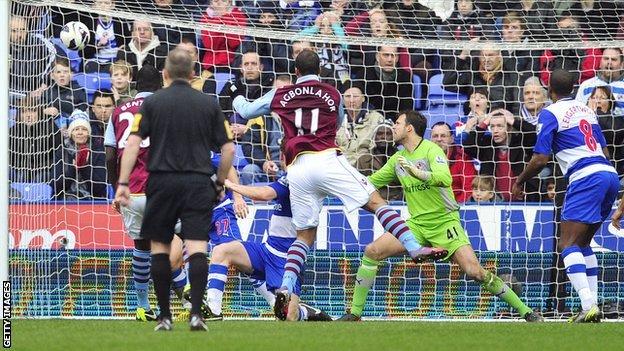 Aston Villa breathed new life into their Premier League survival bid, coming from behind at Reading to snatch only their second league win of 2013.

Reading had snatched the lead after 31 minutes when Villa defender Nathan Baker sliced beyond his own goalkeeper.

Christian Benteke hit back immediately, before Agbonlahor won it for Villa.

This was a crucial result for Villa, whose last away win came on 15 December at Anfield and who had won just one of their previous 11 matches.

But, having won this encounter, forthcoming home matches against Queens Park Rangers and Liverpool can be viewed with renewed hope.

For Reading, the outlook is altogether more bleak.

This was a fourth consecutive league defeat for Brian McDermott's side and at the final whistle the frustration was evident among the home support.

The tension, on both sides, was apparent from the off as shots flew wide and passes went astray.

Andreas Weimann had the best of the early opportunities, only to shoot wide with the goal at his mercy, while Adam Le Fondre might have done better for Reading with a header at the back post.

The game burst into life shortly after the half-hour mark with two goals in a breathless 60-second period.

Reading struck first, snatching the lead when the unfortunate Baker turned Jobi McAnuff's low cross into his own net but Benteke struck back immediately for Villa, his deflected shot beating goalkeeper Stuart Taylor after a delightful surge down the right by Weimann.

It was a moment that robbed the home faithful of their chance to celebrate and brought belief flooding back to Villa.

And as half-time approached, the visitors' growing confidence produced another goal.

Agbonlahor gathered Taylor's half-hearted clearance and unleashed an unstoppable left-footed shot that flashed into the goal from eight yards after Barry Bannan had diverted a shot onto the post.

The goal stunned Reading, who left the field to boos from their own supporters, but McDermott's side never go down without a fight.

They had the ball in the net just before the hour mark - Noel Hunt turning McAnuff's low cross into the net only for the linesman to flag for offside - and continued to push hard.

No Premier League team has conceded more in the second half of games than Villa - while Reading have scored more Premier League goals in the final 15 minutes than any other side.

The home side went close through Hal Robson-Kanu, whose left-foot shot fizzed narrowly wide, before Le Fondre failed to make the most of a chance to head at goal.

McDermott threw on substitutes Garath McCleary and Nick Blackman and Reading created two clear chances for Robson-Kanu. He side-footed the first wide from the penalty spot after controlling the ball on his chest and then headed straight at Guzan when perfectly picked out by McAnuff's cross.

Blackman also went down in the area late on to spark penalty appeals from the Royals manager, while Agbonlahor might have wrapped up the points for Villa with a curled effort that drifted just wide.