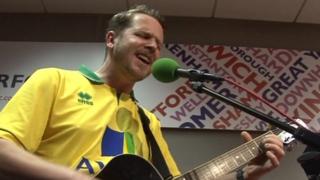 The Sierra Leone international, on loan from Sporting Kansas City, already has a cult status among the Carrow Road faithful, particularly after coming off the bench to score in last week's

Palmer came into the BBC Radio Norfolk studios to perform his song - Heart Shaped Hands - for the McVeigh and Butler Show and Look East.

Premier League reaction: West Ham up to fifth, Fulham out of bottom three

The reasons why football is set for major change

Vote for your goal of the FA Cup second round

Sports Personality of the Year: Second contender announced from 09:40 GMT