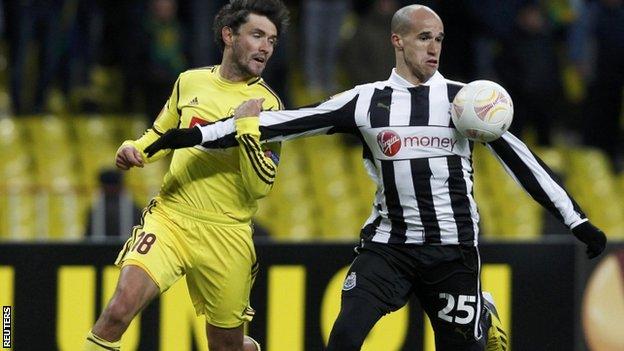 A robust defensive performance earned Newcastle a goalless draw in the first leg of their last-16 Europa League tie against Anzhi Makhachkala.

The only shot of a lacklustre first half came from Samuel Eto'o, who tested Rob Elliot with a long-range strike.

Both teams improved after the break, with a fabulous low save from Elliot preventing Eto'o from scoring.

Newcastle responded and would have gone ahead had Hatem Ben Arfa not shot straight at Vladimir Gabulov.

It was the closest Newcastle, shorn of six regular members of the first team, came to piercing a defence which has conceded only one goal in the competition so far.

But it will be his team's defensive display, during what was a forgettable match, which will please Pardew the most.

The Magpies had scouts keeping tabs on the wealthy Russians for almost three weeks before the tie and even sent former striker Peter Beardsley to Moscow last week to inspect the synthetic pitch.

Anzhi playing away from home

Anzhi are based in Dagestan but the overspill of guerrilla war from neighbouring Chechnya means they must play European games 1,000 miles away in the Russian capital.

Guus Hiddink's men beat the Anfield club 1-0 through brawn rather than beauty in Russia, but they were unable to bully a spirited Newcastle in freezing conditions at the Luzhniki Stadium.

Newcastle's homework had paid dividends and with Pardew having already described playing next week's second leg at St James' Park as an advantage, the Magpies have hope against Hiddink's start-studded team.

The visitors defended deep, often with nine players inside their own half, and suffocated talents such as former Barcelona striker Eto'o and ex-Real Madrid midfielder Lassana Diarra.

Even though possession belonged to Anzhi, the Russians lacked adventure and a long-range dipping strike from Eto'o in the 39th minute - pushed over the crossbar by the underemployed Elliot - was the only attempt at goal from either side before the break.

Anzhi had started well, with the swift, intelligent movement of Willian, a £30m January signing from Shakhtar Donetsk, promising to pose a stern examination to Newcastle's defenders.

But once the Brazilian playmaker departed the field in the 22nd minute after falling awkwardly while under a challenge from Mapou Yanga-Mbiwa, Anzhi's attacking thrust seemed to disappear too.

The Magpies were as timid as the hosts in the final third, although lone striker Ben Arfa, making his first appearance in 12 weeks, did squander a fabulous chance.

Ben Arfa, set free by captain Yohan Cabaye, was unable to mark his 26th birthday with a goal, chipping instead into the hands of Vladimir Gabulov.

The Frenchman's opportunity came a couple of minutes after Elliot had stretched every sinew to stop a 25-yard effort from Eto'o in the 60th minute.

Ben Arfa was substituted within minutes of missing his chance and the 26-year-old's shot proved not only to be his final act of the match, but the last significant opening in a yawn-inducing game.

"It was an absolutely outstanding performance, on a pitch and in conditions that really didn't suit us.

"Our technical players played really well. We controlled the game and limited them to two shots on target and I'm delighted with that.

"We've given ourselves an opportunity to win at home and I fancy us against anybody at home. This is an optimum competition for us."

"We played a very complicated game against a team from the Premier League.

"We are not disappointed because we played a good game, tactically a very strong game. Newcastle actually didn't play a Premier League game, they played a European game."