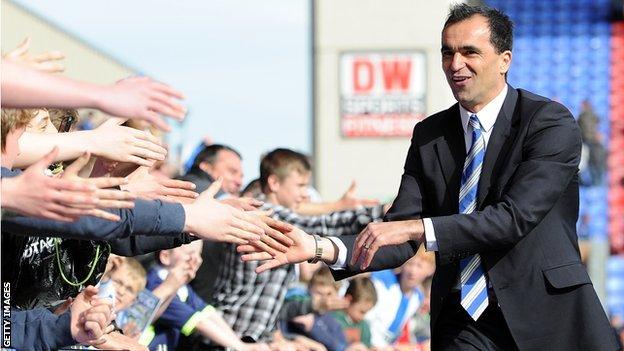 The stakes at the bottom of the Premier League have never been so high.

A starts for the 2013-14 campaign and the clubs clustered around the relegation zone are acutely aware of the financial rewards of staying in English football's top division.

QPR (20 points), Reading (23) and Aston Villa (24) occupy the bottom three places. Wigan are fourth from bottom, with goal difference separating them from Villa, while Southampton have 27 points.

Over the past three seasons Wigan manager Roberto Martinez has guided his team away from trouble and up to safety - and on two of those occasions his side have been bottom of the table with 10 games remaining.

Here the Spaniard gives BBC Sport an insight into how he has done it, and his first tip is to put down the calculator...

1. Don't torture yourself with the maths

"The moment you are trying to reach a specific points tally you are going to be clouding your aim. That would be very, very dangerous, because nobody can guarantee you what points tally will be needed. Throughout history 40 points has always been a healthy figure, but you can recall that there have been seasons in the past when it was not enough to stay up.

"Everyone in the bottom 10 is playing against each other, which means it is impossible to tell the points tally needed. The easiest way to approach it is with the mentality that you can get something out of every game and try to get as many points as you can."

2. Look back as much as forward

"Now is an important moment, one when you look back and get as much information as you can from what happened previously in the season.

"We need to draw on all the experiences that we have had so far. That is in every department, and from both the good performances and the defeats we have had.

"We try to use that by giving as much information as we can to the players. The more the players are prepared, the easier it becomes to handle the occasion and play the game. That makes a big difference."

3. Keep the faith and keep it simple

"It is about being consistent in the way that you are working throughout the season.

"Clearly there are some players who might need a different approach because of the amount of games they have played, but if you have been doing the same job for 28 matches the instructions and messages are going to be a little bit lighter and less complicated than early on in the season."

4. Take the media strain - but only if you need to

"If being near the bottom of the table was a new situation for us, I probably would look into trying to protect the players from the media and focus on trying to let them enjoy their football.

"In our case, every player in this squad has been through the experience time after time and it becomes a way of working. They know how to cope with that.

"I do understand that other football clubs might take into consideration taking the pressure off their players. At this stage of the season it is something different that brings players into the unknown and can affect their performances."

5. Accept that things won't go to plan and think on your feet

"Ideally you would try to rotate the team and share the demands but unfortunately football does not work like that. It brings you different situations that you need to handle.

"The reality is that you get injuries and moments of good and bad form and it is not easy. Sometimes the squad is not as big as you would hope and it is more a case of handling the day-to-day business and making sure the players are ready, whoever gets on the pitch.

"The reality is you need to find solutions on a daily basis to cope with the all the different realities and challenges."

Ten stats for the final 10 games

Hitting form when it matters