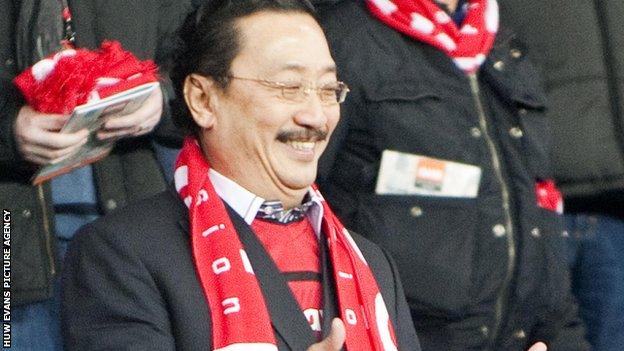 Cardiff City owner Vincent Tan has said that promotion to the Premier League could trigger further "rebranding" and did not rule out using the name Cardiff Dragons.

The Malaysian billionaire has already insisted upon a colour change from blue to red, as well as a new club crest.

"We will think about it when we know the final result of this season," he said about using Cardiff Dragons.

"Then we will think what's the best way to brand it."

In an exclusive interview for the BBC's Sport Wales programme broadcast on Thursday at 19:00 GMT, Tan acknowledged rumours that had recently emerged over the use of Cardiff Dragons but added: "We haven't discussed this. I've not really thought about this in detail.

In the wake of his initial statements to BBC Wales about the club, Tan moved to reassure fans that the club's official name would not change.

In a club website statement, Tan said: "I can assure all supporters that we will not be changing our name from Cardiff City Football Club, a club I am very proud to be a part of.

"Our name is our identity and remains at our core.

"I would not want any of our supporters to be concerned that this change would be made, hoping that this personal commitment from myself removes any fears.

"I believe the colour change is positive and will bring good tidings to Cardiff City Football Club.

"At this point of time, no decision has been made to change the club crest for the next season.

"For the present day, all I would ask is that we all join together, continuing your excellent support at what is a critical juncture in our season.

"Our collective aim is to back Malky Mackay and his team as they work hard to bring us all success.

"Working together we can achieve great things in the name of Cardiff City Football Club."

Tan, who has an estimated wealth of $1.3bn, wants Cardiff to maximise all possible revenue and marketing opportunities in Asia.

Who is Vincent Tan?

After buying more than 35% of the club's shares for £6m in 2010, the 61-year-old Malaysian threatened to withdraw his support in June unless the club agreed to ditch its traditional blue home shirts in favour of red ones.

The new colours were accepted, so too a new badge as a Welsh dragon replaced the bluebird, and further investment followed.

In an interview with BBC Wales' Sport Wales programme, he justified the "controversial decision" of the club's colours, and stressed he is prepared to and intends to make more changes.

"If they don't want to come to support our business, that's fine. We need the majority."

He added: "I believe the change is for the better.

"And if you put in a lot of money, surely you have the right to make a call on some things you believe will make it better.

"If you don't have a say, why the hell do you want to put in so much money?"

After years of financial instability, Cardiff were on the brink of administration before Tan's takeover as part of a Malaysian consortium.

The club continues to struggle financially, recording losses of £13.6m in the year up to the end of May 2012, with an overall recorded debt of £83.1m.

The accounts also show that the debt to Langston, the company represented by ex-City owner Sam Hammam, is put at £19.2m, with a one-off payment of £5m due if City reach the Premier League while the debt is outstanding.

Tan said that resolving this debt is a priority for the club, and again called on Langston to renegotiate to a "fair level" and then convert the "unsecured" loan into equity.

If that happens, Tan said he is willing to turn the £63m loan he has given to the club into equity.

"Their loan is not secured," he said. "If anything happens to the club, Langston will get nothing. So I will convert [my loan] if we can resolve with Langston.

"And if Sam Hammam loves Cardiff as he claims he does, he should come and sit down and then we'll find a solution."

Having failed in the Championship play-offs three years in a row, Cardiff are in a stronger position than ever to reach the Premier League.

They have an eight-point lead with 13 games remaining, but Tan said he would not walk away if promotion was not secured.

"If the fans welcome me, I can stay for a long time," he said, promising a further £25m to manager Malky Mackay for new players should they go up.

"But if I find they are not welcoming and rude, then maybe I will find a new buyer and go off. But if I were to sell, I'd make sure I would leave it in good hands."

A section of Cardiff fans continue to oppose Tan's colour change. A protest was held at the end of the last home game to Brighton - which Tan attended - when free red scarves were handed out.

Tan referred to the dissenting voices as "a bunch of mostly young kids" and argued a change was long overdue.

"Have they achieved any success under this Bluebirds brand?," he asked "So why do we hold onto something that hasn't achieved much success?"