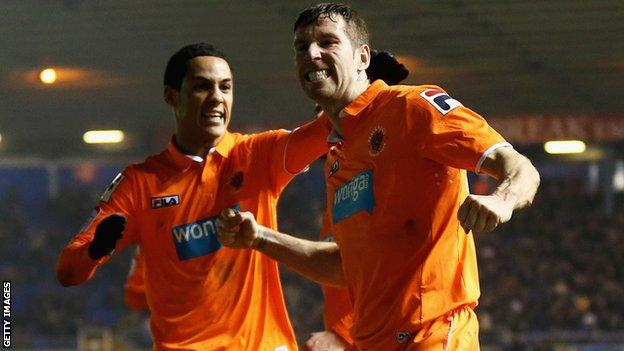 The former Rangers defender headed in Neal Eardley's corner with 16 minutes left after Curtis Davies had given Birmingham a first-half lead.

Ince had started his reign with a 2-0 defeat at Leeds before goalless draws against Leicester and Bristol City.

He could have suffered defeat at St Andrew's, but Wade Elliott missed a late chance for Birmingham.

The draw leaves Ince still waiting for his first win since taking charge at Bloomfield Road last month, with both sides hovering five points above the drop zone.

Ince's son Tom found the side netting with just over a minute on the clock as both sides looked to stamp their authority on the game.

The England Under-21 international was looking particularly lively and was only denied by a great last-ditch tackle by Mitch Hancox, before Davies cleared off the line and then keeper Jack Butland got behind a solid strike from the corner of the area.

Peter Lovenkrands had a great chance just after the half-hour mark, latching on to Nikola Zigic's flick to beat keeper Matt Gilks only to see his effort roll across the face of goal.

Butland dropped a deep cross but redeemed himself by producing a great reflex save to keep out Gary Taylor-Fletcher, before Matt Phillips drilled narrowly wide from distance.

But then just as the first half looked set to end goalless, Davies found plenty of space to head in Chris Burke's deep corner.

Zigic blazed over a great chance to double City's advantage within minutes of the restart after Gilks had dropped Hancox's long free-kick.

Birmingham then came within inches of a second as Lovenkrands latched onto a Paul Caddis ball forward and checked before firing off a shot which hit the inside of a post, rolled across the line and out.

But Blackpool then drew level as Broadfoot nodded home from Eardley's corner.

The hosts were presented with a golden opportunity to win it in the 87th minute but substitute Elliott somehow blazed well over the bar with the goal at his mercy from Burke's low cross.

Birmingham manager Lee Clark: "I think we deserved to win the game. It was a nervy start for the first 15-20 minutes but we grew into the game and finished the half really strongly. We could have been more than one-nil up.

"And then we started the second half really well too. Unfortunately we couldn't get that decisive second goal and then they score a very similar goal to us from a set-play.

"It's a bit frustrating really. We've played with a lot of desire, tenacity and at a high tempo."

Blackpool manager Paul Ince: "It would be nice to get a win but I've only been here two weeks. Apart from the Leeds game, we've got three draws and we're building blocks at the moment.

"It's never easy coming to St Andrew's, especially with their crowd and when they're winning 1-0, but we showed great character and great endeavour to get back into the game.