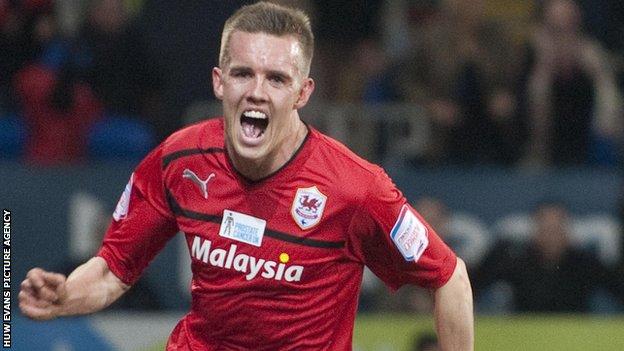 Craig Noone came off the bench to rescue a draw for Cardiff City that maintains their five-point lead at the top of the Championship.

The visitors had dominated up to Sammon's goal, with Chris Martin denied by a marginal offside decision.

But Noone added late impetus and rose at the far post to head home Andrew Taylor's cross eight minutes from time.

After looking so comfortable for the majority of the game, Derby were forced to hang on for a point as Cardiff finally applied some pressure.

Noone, sent off when the sides met at Pride Park in November, was the instigator as he replaced Tommy Smith after 72 minutes.

The substitute almost grabbed a spectacular winner when his curler came within inches of finding the top corner.

Defeat would have been tough on Derby - whose run without a win extends to seven games - as they capitalised on a nervous Cardiff display and enjoyed the better chances.

Paul Coutts fizzed a half-volley that was deflected wide by home goalkeeper David Marshall and the visitors screamed for a penalty when a diving Ben Turner looked to have used his arm to block Jeff Hendrick's drive.

Careless Cardiff passing then allowed Derby to break and the move eventually ended with Chris Martin finding the bottom corner.

His celebration was short-lived, though, as he was flagged for offside. Replays suggested the assistant referee made the wrong call.

After the break, Marshall kept out another low strike from Coutts as the home crowd's frustration grew.

Derby's dominance was rewarded, though, when Sammon slotted home from Ben Davies's cross on 75 minutes. Almost predictably, the chance came after Cardiff lost possession down their own right flank.

A third defeat in four games looked a distinct possibility as Cardiff failed to generate any momentum, but Noone's introduction immediately changed the mood.

The winger is known more for his dribbling skills than his aerial power but he rose purposefully at the far post to meet Taylor's left-wing cross, directing the ball back across goal into the bottom corner.

Cardiff pushed for the winner and Noone's 18-yard curler almost obliged, before another substitute, Rudy Gestede, lashed over from six yards in injury time.

Cardiff City manager Malky Mackay said: "To come back and get the goal showed the resilience in that last 15 minutes, and we nearly got the winner.

"On another day Rudy would have done better a few yards out. But we showed great spirit and endeavour and I suppose a point is a fair result.

"It's another point towards where we would like to go."

Derby County first-team coach Andy Garner said: "With the disallowed goal I had a word with the assistant referee at half-time, which is not the best of times, but I asked him if he was 100% happy with his decision and he said he was.

"I have seen the replay and Chris [Martin] is half a yard onside.

"Chris walked in at half-time and said there was no way he was offside, and he was right. As a striker you know if you are onside or offside."