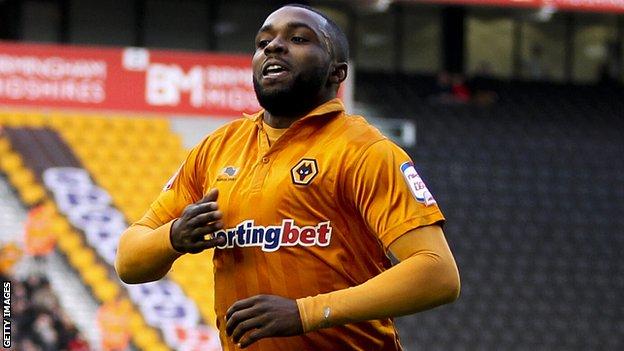 Wolves beat Millwall to climb out of the Championship relegation zone as manager Dean Saunders secured his first win since taking over at Molineux.

Wolves began brightly, with midfielder David Edwards volleying in the opening goal in the ninth minute.

Sylvan Ebanks-Blake made the game safe with a stunning overhead kick just after the hour mark.

In nine games since succeeding Stale Solbakken on 7 January, Saunders' side had drawn five times and lost four.

The result takes Wolves one point and one place above the Championship relegation zone.

The visitors went into the game on the back of a heartening result and performance against Watford, Bakary Sako's late goal securing a 1-1 draw against one of the division's form sides.

And they made an ideal start at the New Den as Edwards's first goal since August put them ahead. Ebanks-Blake controlled a ball from Stephen Ward at the back post before picking out Edwards, who volleyed into the net.

Wolves were firmly in control and the lively Edwards was only denied a second when his shot was blocked by Shane Lowry.

Millwall, who are 12 points away from the play-offs and six clear of relegation in 15th place, rarely looked like scoring and their only effort of note in the first half, a Chris Taylor header, was comfortably saved by Carl Ikeme.

The Lions improved slightly after the break and came close to equalising in the 52nd minute, but Taylor's low cross was just out of the reach of Andy Keogh.

But Ebanks-Blake ensured it was Wolves who would take the points as he scored acrobatically from Jamie O'Hara's headed ball into the box.

"I thought we lacked passion and heart, the basic things you need - especially for this club.

"It's an apology to the people that paid to see that. You accept you will lose games, but that was a poor performance."

"I was always confident we'd turn things round.

"I know how to get a team to win - you've just got to keep believing what you're telling the players is right.

"Most of our performances have been good, but we've got the two goals to show for it here."