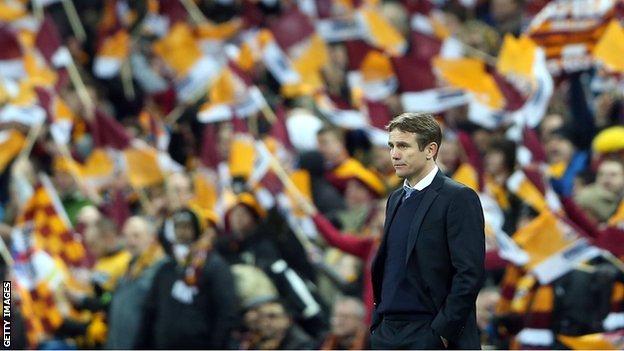 Even before Nathan Dyer's 16th minute opener in Sunday's Capital One Cup final defeat by Swansea, the distant odds of a Bradford upset were beginning to look more and more remote.

There is an argument that suggests there is no replacement for hard work but it would be wrong to fault the endeavour or application of Bradford City's players; they were simply outclassed and outmanoeuvred by the better, vastly more expensively assembled team.

A 5-0 defeat might look painful but young defender Carl McHugh, released by Reading in the summer, kept the achievements of the League Two side in context.

He told BBC Radio Leeds: "I think it was just a step too far for us, they were fantastic.

"It was an unbelievable experience and we did great to get here. Walking out on the pitch before the game was the stuff dreams are made of and nobody can take that from any of the players."

Skipper Gary Jones, who registered his side's first and only shot on target with five minutes remaining, echoed the sentiments of the Irishman.

"I'm just sorry we didn't deliver today but it has been a great run. We can hold our heads up high," he said.

"The supporters were brilliant and they've been with this club through thick and thin. They deserved to be here."

If the Bantams never quite managed to compete on the pitch, the fans of the fourth tier side certainly impressed in the Wembley stands.

Manager Phil Parkinson said after the game that the club's "magnificent" supporters were the highlight of the match and the final 20 minutes where they waved their flags, chanted songs and backed their team as if they were leading, rather than trailing, 4-0 was a mark of the goodwill the players had built up in reaching just a second ever major cup final.

This was an emotional day for all Bradford fans but especially those directly connected with the tragic events of 11 May 1985.

A day of celebration (the Bantams having clinched promotion to the third tier) turned into one of the darkest days in British football history as a fire in the main stand claimed the lives of 54 Bradford fans and two Lincoln City supporters.

Paul Firth, author of the book 'Four minutes to Hell: The Story of the Bradford City Fire', was in the stand that day and told BBC Sport ahead of the final: "As the players walk out at Wembley, in what will be an essentially all black kit at that stage, I shall be thinking of those we lost, those who suffered a loss and those who were injured.

"This will be one of the greatest and happiest moments in the club's history. What happened on 11 May will not overshadow the moment, but will not be forgotten, no matter how quietly we remember."

The huge flag passed around the Bantams fans commemorating the 56 showed that Bradford fans saw this as a day to celebrate, but also to remember.

Much has been made of the uniting impact the run to the cup final had on Bradford's communities and supporters of all backgrounds, many of whom had queued for hours to get tickets. And they were all in a mood to party on a freezing Wembley Way hours before kick off, because after the last 12 years, many are just happy to have a club to support at all.

Since the West Yorkshire club slipped out of the Premier League and into financial turmoil in 2001, there have been all too few highs amongst the lows.

Players signed by then chairman Geoff Richmond, including forward Benito Carbone and full-back Dan Petrescu during a spell he later referred to as 'six weeks of madness', nearly bankrupted the club and they entered administration in 2002.

Two years later they were back in administration again and heading back into the third tier, before suffering the ignominy of relegation to League Two in 2007.

That is where they have remained ever since, but boss Parkinson is keen for the club to take the positives from an amazing run that saw them beat Wigan, Arsenal and Aston Villa back into the league.

The Bantams, who have won just once in the league this year, are eight points off seventh place with 15 games left to play - at least two more than any of their promotion rivals.

"We still have a third of the season to play and I firmly believe we have a good enough squad to mount a challenge," he said.

"We'll approach every game in a really positive way and we'll see where that takes us."

It might have not have had the fairytale ending they had hoped for, but no one connected with Bradford City will be feeling sorry for themselves.

The return to earth has come with the obligatory bump but now the players must set about ensuring they give the fans something else to celebrate at the end of the season.