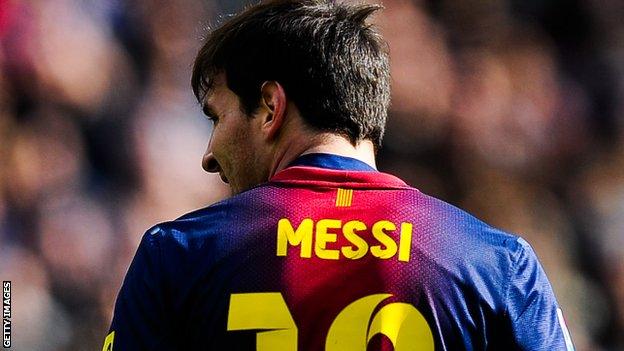 Just how far away are England from producing their very own Lionel Messi?

The prospect of a player in the shirt of the Three Lions, displaying the kind of skills and intelligence currently associated with arguably the world's most talented footballer is a mouth-watering one.

But is such a player merely a pipe dream or a real possibility?

For years, coaches at grassroots level have had to contend with poor facilities, uneven pitches and unpredictable weather, undoubtedly hindering efforts to improve the technical ability of the next generation of English footballers.

The Football Association has already recognised the need for an overhaul, pledging to invest £150m over the next three years to improve facilities.

However, it is another step they are taking, which won't garner the kind of attention a multi-million pound cash injection has, that could ultimately prove as influential.

The latest edition of "The Future Game" - the FA's technical guide for young player development - will include a recommendation for a sport which the likes of Messi and Cristiano Ronaldo grew up on - Futsal.

Futsal, a small-sided variant of football played between two teams of five players in an indoor arena, is something that has been played for decades in countries like Brazil, Argentina, Spain and Italy - countries who have won seven of the previous eight World Cups between them, and are also the top sides in Futsal.

In those countries, Futsal is part of a development programme where children play the sport up until the ages of 10 or 11 before deciding whether to focus solely on football or stay with the small-sided variant.

Peter Sturgess is the FA's head of development for five- to 11-year-old players and head coach of the England men's Futsal team.

He told BBC Sport: "The FA is establishing Futsal as part of the footballing landscape in this country.

World Player of the Year Lionel Messi: "In Argentina, when I was a young boy, I used to play a lot of Futsal on the street and with Newell's Old Boys. It was a really fun game that's helped me a great deal."

Real Madrid winger Cristiano Ronaldo: "In Portugal, all we played growing up was Futsal. The smaller court helped my footwork skills, the nature of the game made me feel so free when I played. If it wasn't for Futsal, I would definitely not be the player I am today."

Milan and Brazil forward Robinho: "I played Futsal for many years and it helped me to become the player I am today. There you don't have time to think, you are always tightly marked and you develop a sense for performing in small spaces."

"Because of the similarities between Futsal and football, players who have followed both during their development histories have been the ones found to go on and do really well in the game.

"If kids are brought up on that, their ability to deal with a situation when things get tight in the penalty area in an 11-a-side game has to be improved."

For years, youth development in England has favoured physical over technical characteristics, but the football landscape in the country is evolving. Small skilful players like Juan Mata and David Silva are now excelling in the Premier League, while midfield enforcers or burly centre-forwards are not so much the mainstay of teams in the top flight.

This has been recognised within the FA and, while it may have taken it time to awaken from its slumber, English football's governing body now seems ready to catch up with the rest of the world by improving the skill level of young footballers. This is where Futsal comes in.

By adding the sport to their official guide for youth development, the FA are encouraging more and more grassroots coaches to incorporate Futsal into their programmes.

"Because Futsal is such a fast, skill-based and tactical sport I just think our players are going to be blasted by something in a way they haven't been exposed to before," added Sturgess.

"Once we get a generation of kids who are experiencing Futsal and football, I think we will be dangerous."

For a sneak peek at the type of footballer being brought up on Futsal creates, people need only look at one of the most exciting young talents in the country - Will Hughes.

At just 17, the midfielder is already a key player for Championship side Derby, and has been linked with a string of Premier League clubs this season.

Hughes has been lauded for his ball control, passing and technical ability - all of which the teenager says he developed by playing Futsal as a youngster.

Hughes told BBC Sport: "It does help and I think it will be becoming an integral part of football in coming years.

"Look at what people say after England go out of a major tournament, talking about technique. Physicality is important but I think technique has overcome that - look at the current Barcelona team and they are more technically developed than we are."

But as well as aiding the development of footballers, Futsal is a popular game in its own right.

An estimated 30 million people play it worldwide - putting it on par with women's football - and it is recognised by Fifa as the "fastest growing indoor sport in the world".

Around 170 of the 209 Fifa member associations play Futsal, while a record 24 countries participated in the Futsal World Cup last year.

England, ranked 81st in the world, were not one of those countries and have yet to qualify for a major tournament.

They are getting closer, though, and this week played in the main round of qualifying for Uefa Futsal Euro 2014 - the first time they have ever reached that stage of a major tournament. While they did not qualify for the finals, to reach the stage they did is seen as a significant step forward.

There is a real push for Futsal to be included in the 2020 Olympics, with Fifa president Sepp Blatter one of its biggest supporters, while Commonwealth Games Federation president Prince Tunku Imran has been quoted as calling for it to be added to the Games programme.

Stages such as these would undoubtedly provide Futsal with the exposure it needs to really flourish.

That is still some years away but if giving Futsal a serious look at grassroots level now both increases the chances of producing the English Messi and Great Britain's gold medal prospects, that surely can only be a good a thing?

How to get involved

The FA has a variety of ways for people to get involved from casual Futsal Fives leagues to their annual National Youth Futsal Festival and the structured FA National Futsal Leagues.

County FAs also provide information and advice on how to get involved.