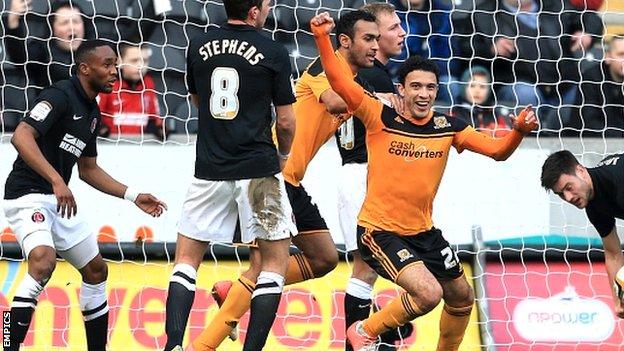 A rare good news story has emerged for Egyptian football fans at a time when they could use it most.

The location may be unfamiliar to many in Egypt but the names are household across the North African country - as they now are in the north-east of England.

Fans of English second-tier side Hull City may have seen the re-signing of Ahmed Elmohamady and loan deals reached for Mohamed Nagy and Ahmed Fathi as a leap of faith but to Egyptian supporters they are seasoned internationals, with continental titles under their belts.

Winger Elmohamady - who was part of the Egyptian squads that won the 2008 and 2010 Africa Cup of Nations - was already well known to Tigers fans from a previous loan spell.

He was drafted back in from Sunderland by Hull coach Steve Bruce in January, along with striker Nagy - nicknamed Gedo - and Fathi, from Cairo giants Al Ahly.

The Egyptian trio have since made an immediate impact, with Gedo scoring in his last three appearances, and Elmohamady also hitting the target, as the Tigers push for promotion to the Premier League.

Bruce says Egyptian-born owner Assem Allam was instrumental in bringing them to the club, having established links with the Cairo-based side in the wake of the Port Said stadium disaster last February.

"Gedo has scored three in three, just at the right time for us, he's come into the frame and I hope it continues over the next couple of months," Bruce told BBC Sport.

"Elmohamady has [also] come here and done fantastic for me."

Bruce also pays tribute to the strength and quality of Egyptian players, after his three new acquisitions put the Tigers to within five points of automatic promotion to the English top flight.

"Let's be fair, they're a big football nation. You can't get many of them because of the work permit rules," he said.

Because of these players and the recent results and success at Hull, Egyptians have become more interested in the English Championship

"We've managed to get [Gedo] in and he's proved what a good player he is.

"We're delighted to get them and [Gedo] has had a wonderful start.

"I didn't think it would be possible to get two international footballers on loan, and Ahmed Fathi will be a big player for us too."

Gedo - who hit the winner for Egypt in their 1-0 triumph over Ghana in the 2010 Nations Cup final - has in fact, scored 17 goals in 32 appearances for the Pharaohs.

He and Fathi departed Ahly just before the Egyptian league resumed after a year's absence - following the Port Said tragedy that killed more than 70 people.

And the two are being backed by their international and club team-mate to hit top form.

"It's normal [for Gedo] - he's like this all the time, he scores important goals," Elmohamady told BBC Radio Humberside.

"I've been with him three years in the national team and I know him.

"Fathi is [also] a fantastic player. He can play midfield, left-back, centre-half - he's a great player.

"I've been in the UK two and a half years without any other Egyptian players in the Premier League and the Championship.

Bruce has previous history in bringing the best out of Egyptians in England, after he brought Pharaohs striker Amr Zaki to Wigan Athletic on loan from Zamalek, where he was also an instant hit on arrival.

Zaki's success in the Premier League prompted a surge in interest in the English top-division in the North African country - a feat which is now being extended to the second tier, according to the BBC's Egyptian football reporter Inas Mazhar.

"Because of these three players and the recent results and success at Hull, Egyptians have become more interested in the English Championship," Mazhar said.

"Gedo and Fathi have always been Ahly's key players.

"But it is Gedo - who we have always known as top-scorer and saviour - who is able to change results in critical situations.

"Throughout his career, his performance has always been consistent."

Whether the players' loan moves become permanent is likely to be decided at the end of their promotion battle, but judging by their form so far, the newly-restarted Egyptian league's loss may be the English Championship - and possibly Premier League's - gain.