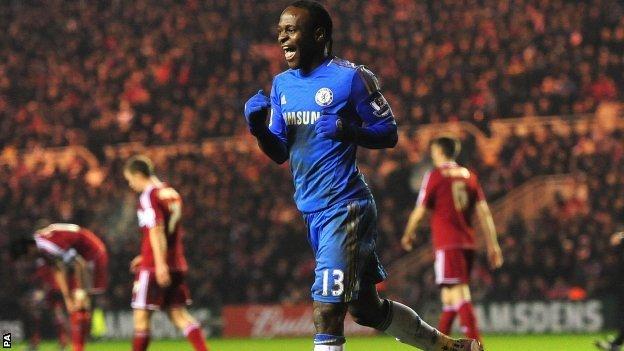 Chelsea will face Manchester United in the FA Cup quarter-finals after comfortably beating Championship side Middlesbrough at the Riverside.

Chances were limited on a freezing night on Teesside as Scott McDonald headed wide for the hosts in the first half before Petr Cech spilled Mustapha Carayol's shot.

Chelsea made the breakthrough after the interval when Ramires's shot hit Fernando Torres on its way in.

Eden Hazard then came on to add more thrust to the visitors' attacking play, and the Belgian's clever one-two with Oscar helped set up Victor Moses for a simple finish after 72 minutes.

The fans are not helping us. At the end of the season I will leave. They don't have to worry about me

But prior to conceding, Tony Mowbray's team failed to regularly test a much-changed Chelsea side, in keeping with a wretched run of one win in nine league games this year.

A more confident side might well have pressured Rafael Benitez's men, who had Paulo Ferreira, Yossi Benayoun and Dutch teenager Nathan Ake all making first starts of the season amid eight changes to the team that lost to Manchester City on Sunday.

Middlesbrough, however, did not have the necessary composure in front of goal.

Victory for Chelsea, currently fourth in the Premier League, keeps them in the hunt for two trophies - they are challenging for the Europa League, as well as the FA Cup - in addition to their quest for Champions League qualification.

For interim boss Benitez, however, the win now looks unlikely to provide any breathing space with the fans.

The sheer number of team alterations meant Chelsea were struggling for fluency early on. Moses and Ramires both burst into the box, but could not find a team-mate, while Andre Bikey blocked an Oscar shot as last season's FA Cup winners failed to test Boro keeper Jason Steele.

Boro took time to find their rhythm, too, and it was not until the 20th minute that Mowbray's side had their first decent spell of possession.

Five minutes later they almost went ahead when McDonald headed wide from Bailey's right-wing cross and just before the break Cech failed to hold Carayol's shot, but unfortunately for the Championship side, no-one was there to pick up the pieces.

Torres had a couple of surging runs in the first period without reward, but he was in the right place on 51 minutes as Ramires's 25-yard shot flicked in via the Spaniard on the edge of the area, following neat work by Oscar.

The goal was tough luck on Middlesbrough, but once Hazard was introduced Chelsea attacked with more purpose, the Belgian and Oscar both shooting wide as the visitors pressed.

Hazard was involved in the Blues' second goal - a delightful move that culminated in a straightforward finish for Moses.

Although Miller should have forced a save from Cech with a volley from the edge of the area, he did call the Chelsea keeper into late action with a powerful run and shot at the near post.

Mowbray's side will now return to their Championship challenge as they aim keep in touch of the play-off places, but this week does not get any easier for them as they face leaders Cardiff at the weekend.