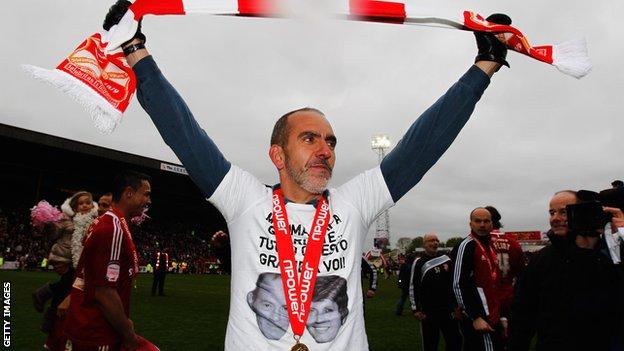 Paolo Di Canio's first foray into management was never going to be a quiet one.

The flamboyant former Premier League striker spent 21 months in charge at Swindon Town and it was one of their most successful spells on the pitch, as well as their most dramatic off it.

Di Canio's resignation on Monday brought his eventful tenure at the County Ground to an end.

Here, BBC West Sport looks back at the most memorable moments of the Di Canio era.

The appointment of the former Premier League star at lowly League Two side Swindon came as a surprise to many.

Di Canio had made a name for himself as a hugely talented and equally troublesome striker for West Ham and Sheffield Wednesday, but had never managed in the English game.

But when Swindon found themselves relegated and managerless at the end of the 2010-11 season, chairman Jeremy Wray took a punt on the Italian - and it worked.

Swindon got off to a shaky start with only two wins from his first seven games, but then came an unbeaten run from October until December 2011, and they found themselves on course for automatic promotion.

But Di Canio wanted silverware and, after losing the Johnstone's Paint Trophy final to Chesterfield, he set his sights firmly on the League Two title.

It was secured with an emphatic 5-0 victory over Port Vale and an emotional Di Canio celebrated wildly on the County Ground pitch, wearing a t-shirt dedicated to his late parents and holding his red and white scarf aloft.

The Robins' success has continued this term - a win over Tranmere on Tuesday will lift them to the top of the League One table and extend their unbeaten run to 12 games.

It did not take long for Di Canio to hit the headlines for his off-field antics.

The forward, who had joined the club 11 days previously, appeared to start arguing with fitness coach Claudio Donatelli as he left the field and, as Di Canio intervened, the pair then started a bust-up themselves.

Di Canio refused to play Clarke again and the player was sent out on loan to Chesterfield.

Tempers flared up again this season - this time between Di Canio and young goalkeeper Wes Foderingham - during Swindon's game with Preston.

The 21-year-old was substituted on 21 minutes after his error led to Akpo Sodje's opener. Foderingham entered a heated exchange with Di Canio as he left the field and took his frustrations out on a water bottle before heading to the stands to watch the remainder of the game.

Di Canio branded his keeper "the worst professional he had ever seen" and said he would not play him until he apologised. A day later, all was forgiven and Foderingham retained the number one jersey.

"When we first got to know each other it was like boxers sparring," admitted former chairman Wray, the man behind Di Canio's appointment. "Then you find you trust each other and that is what he relied on and expected from everyone he met."

Wray was a close confidant of Di Canio's and the pair drew up the infamous 'three-year plan' to get Swindon back to the Championship.

"Yes, it was a risk but it was a risk based on information I'd picked up about someone who I thought was special," Wray told BBC Wiltshire following their promotion to League One.

"I knew there were people out there saying 'I told you so' after only a few days but I'm secretly chuffed I can turn around to two or three people and make a sign I shouldn't make at them.

"He writes his own script. He's everything we hoped he would be."

The first time Di Canio publicly questioned his Swindon future came after Wray was dismissed from his role in October.

And when the Town boss announced his resignation four months later, he blamed "broken promises" from the board.

"He expects a certain standard from others and gives the same standard in return," added Wray.

"He is loyal and he expects loyalty in return. It is a two-way street and from everything I have read and heard you can understand he feels let down.

"I am very, very disappointed and sad he has not had the chance to finish what I have no doubt he was going to achieve, which was promotion to the Championship.

"It may still happen without him but I don't think anyone will deny that if they do go up it will be because of the work he has done."

On being appointed Swindon manager: "A lion can't stay in a cage. A lion has to be on the pitch. So, this is my job and this is my life."

On his players: "With some players, if he has a chihuahua character I can't make a chihuahua into a rottweiler. He could be a proud chihuahua but he remains a chihuahua."

On being banned from the touchline by the FA: "It they want to send me off in every game - no problem. I will win this league anyway. They say 'you move your arms too much' but I will do what I want in the technical area. They can't stop me. I will move my body, my arms, my shoulders, my legs; they can't send me off every time."

On promotion: "The players were the protagonists, but I did a fantastic job."

Reacting to the news his players were involved in an unauthorised night out: "You can celebrate with one, two, three glasses of red wine or champagne, but why get drunk? I don't see why. I prefer to stay cool. Have a hug with your team-mates, or your wife, or girlfriend, or baby."

On his possible exit from Swindon: "I am the manager and they are the fans. For this, they have to hope that I will be the manager in the future because it's difficult to find another one like me."