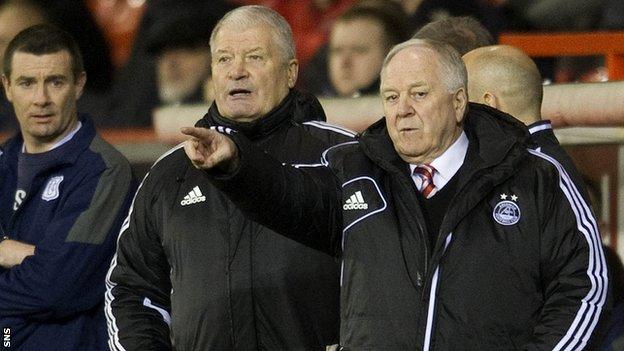 Craig Brown praised his Aberdeen side following their victory over Dundee but felt aggrieved over an unsuccessful penalty appeal.

"We should have had a penalty when Scott Vernon's shot hit an arm," Brown told BBC Scotland.

"A week ago we had Mark Reynolds sent off for an accidental handball when the ball struck his arm from no distance."

"There's a lack of consistency I'm afraid and I'm saying this having won the game," he added.

The Dons boss said goalscorer McGinn "did very well" commenting: "We played poorly in the second half and were bedevilled by injuries. However, we managed to keep a clean sheet.

"The performance wasn't good in the second half, and it kind of makes up for a fortnight ago against Hibs.

"We dominated that game and only got one point whereas in the second half tonight Dundee dominated and we got three points, so it perhaps evens it out a bit.

"Dundee haven't been losing a lot of goals and are hard to score against. I hope they'll take points off of some of our rivals.

"I'm sure they will and I'm sure no team will want to play Dundee because I see a big improvement. I've always said they're in a false position, isolated as they are.

"I think tonight proved that."