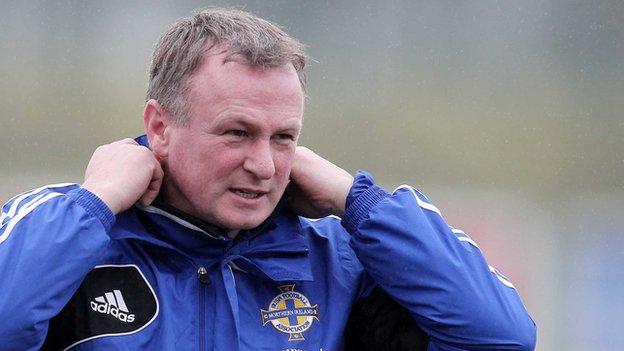 As Northern Ireland dropped back out of the top 100 in Fifa's world rankings, Russia slipped too - just outside the top 10.

Many people treat these monthly ratings from football's world governing body with more than a little scepticism but on this occasion they serve to make a point - simply accentuating the gulf in class that exists between Michael O'Neill's men and Fabio Capello's attempt at a Russian revolution.

These same statistics indicate that Russia have never dipped below 40th spot, offering undeniable evidence of their global status.

They arrive at Windsor Park on 22 March with a 100% record in World Cup qualifying Group F - four wins from four games, scoring a total of eight goals and Capello is even more satisfied with the fact that they have yet to concede.

In stark contrast, Northern Ireland go into a series of three home games - Israel and Portugal follow the Russians - with three points to show from their opening four matches and manager O'Neill still seeking that elusive first win of his tenure.

O'Neill has presided over five draws and three defeats since taking over from Nigel Worthington over a year ago.

Hopes that the recent Malta mission would deliver that victory failed to materialise in a disappointing scoreless stalemate but O'Neill will hope that at home his players can spring a surprise on the Russians.

Before their 2-0 defeat in Moscow last September, Northern Ireland had not previously played a team representing Russia following the dissolution of the Soviet Union in the modern era although they have faced the former USSR four times and in both Windsor Park games the men in green recorded draws.

The September 1969 World Cup qualifier failed to produce a goal but midfielder Jimmy Nicholson earned a point in a 1-1 draw in a European Championship qualifier in 1971 when Billy Bingham was in his first stint as coach.

O'Neill talked of the Malta exercise as enabling him to experiment with tactics in preparation of the Russian test.

However, when all is said and done, it will again be a case of Northern Ireland attempting to tread that fine line between delivering a solid defensive performance and attempting to find ways of piercing the Russians' resilient rearguard which has so far proved a fruitless exercise for group rivals Israel, Portugal and Azerbaijan.

Goals by Viktor Faizulin and Roman Shirokov gave Capello a winning start in his new posting against Northern Ireland six months ago.

Faizulin scored in Russia's last group game, an impressive 4-0 dismantling of Israel in Tel Aviv where Alexander Kerzhakov was twice on target with Alexander Kokorin also chipping in.

Three successive draws have frustrated O'Neill in this campaign.

He had expected to do better at home to Luxembourg and Azerbaijan although the 1-1 outcome in Portugal was undoubtedly the high point of the campaign to date.

It will take replication of their formidable resolve and refreshing adventure in Porto's rainswept Estádio do Dragão to render any form of return. So who will be charged with leading from the front?

FC Sion striker Kyle Lafferty, who has started every qualifier thus far, is suspended and O'Neill, by by own admission, was left lamenting his side's lack of cutting edge against the Maltese minnows.

This is not a new conundrum. It has been an age old problem, only gloriously interrupted by David Healy's memorable contribution which has, alas, all but passed.

O'Neill openly admits the frustration: "Of course it's a concern but at the end of the day the only people who can change that are myself and the players and I'm aware of that."

Is Inverness hit man Billy McKay the man for the job?

His lack of international experience is against him and while there was intense speculation he would start in Valletta, O'Neill opted to try Walsall's Will Grigg from the start, handing him his second cap up front.

McKay, in sensational form for Terry Butcher's Thistle in the SPL, had to wait for more than an hour before he replaced Newcastle United's Shane Ferguson.

Aberdeen's in-form Niall McGinn, scorer of that cracking goal against Portugal, the inventive Pat McCourt and Josh Magennis are all attempting to catch the manager's eye, as is Rangers' Dean Shiels who seldom disappoints in a green jersey.

Adding to the degree of difficulty elsewhere in O'Neill's plans is the unavailability of Chris Baird through suspension.

In the role of underdogs, Northern Ireland have a habit of thriving. Porto was proof positive of that and there were encouraging aspects of the performance in Moscow when discipline and concentration frustrated the Russians for long spells.

The unpredictability of football and Northern Ireland's journey along its rocky road make all this such an addiction.

After 12 games without a win, the success-starved fans can only hope against hope that number 13 brings a change in fortune.