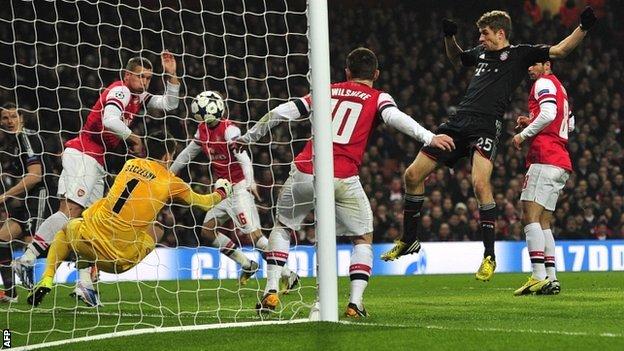 Arsenal's Champions League ambitions - and their hopes of a first trophy since 2005 - look to be in tatters after they were well beaten by Bayern Munich at Emirates Stadium.

Arsene Wenger demanded an instant response from his players after the shock FA Cup fifth-round defeat at home by Championship side Blackburn Rovers on Saturday brought a storm of criticism for manager and players.

Bundesliga leaders Bayern were in no mood to offer any respite and made it a miserable few days for Arsenal as they established a commanding advantage ahead of the second leg of this last 16 tie in the Allianz Arena.

"The wider and more painful truth is even starker for Wenger after the runaway Bundesliga leaders spent 90 minutes plus stoppage time illustrating to The Emirates what Arsenal have become; how far they have fallen in European terms."

Toni Kroos and Thomas Mueller gave Bayern control with two early goals, and even though Lukas Podolski pulled a goal back for Arsenal in the second half, Mario Mandzukic's scrambled third left the Gunners requiring something bordering on miraculous in Germany.

Arsenal showed plenty of spirit, but Bayern simply carried too much quality and experience. All evidence suggests a fight for a place in the Premier League's top four can be Wenger's only realistic target for the rest of the season.

The old defensive fragility undermined Arsenal, and in attack they ran up against a resolute Bayern defence that offered little to the likes of Theo Walcott.

Arsenal's fragile confidence required some repair following the Blackburn defeat - but Bayern pounced ruthlessly on a vulnerable opponent to score twice in the first 21 minutes.

Kroos struck first after only seven minutes when he was left unattended on the edge of the area and showed fine technique in controlling a powerful volley into the turf that beat Arsenal keeper Wojciech Szczesny.

Arsenal's fans roared their team forward in raucous fashion, with no hint of dissent, but their plight worsened as they swiftly conceded another sloppy goal to ensure Bayern were in total command. Szczesny could only palm out Daniel van Buyten's near-post header and Mueller reacted quicker than Mikel Arteta to turn the rebound into the roof of the net.

Wenger's side were frustrated in their attempts to subdue Bayern and it resulted in first-half yellow cards for Bacary Sagna, Thomas Vermaelen and Arteta.

The Gunners showed reserves of resilience but Bayern's pace, power and relentless work-rate made them an ominous threat. Mandzukic almost added a third moments before half-time when his header was only inches wide from Philipp Lahm's right-wing cross.

Arsenal were in desperate straits and needed to muster a swift response. It came 10 minutes after the restart when Germany striker Podolski headed in after Bayern keeper Manuel Neuer failed to deal with a corner.

It offered Arsenal hope at last. And with his side finally gathering momentum, Wenger made a double change with 19 minutes left, sending on Olivier Giroud and Tomas Rosicky for Podolski and Aaron Ramsey.

Frenchman Giroud almost brought Arsenal level with his first touch, a snap-shot that was blocked, with more than an element of good fortune, by Neuer.

As Arsenal's supporters sensed the possibility of an unlikely comeback, Bayern scored what will surely prove to be a killer third goal that owed something to both accident and design.

Substitute Arjen Robben, on for Franck Ribery, played in the marauding Lahm. The Bayern captain found Mandzukic, who fell and half-hit his attempted finish only to see the bounce wrong-foot Szczesny and end up in the net.