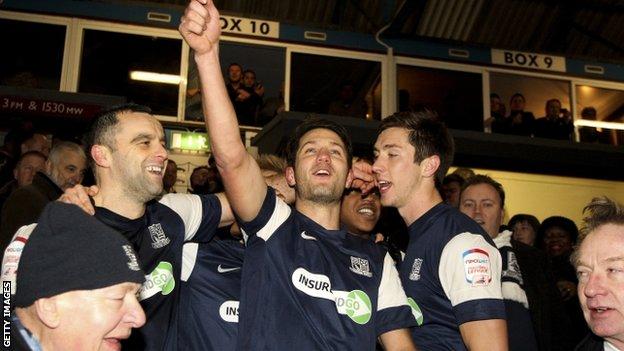 Leading 1-0 from the first leg, Southend were pegged back when Shaun Batt poked in Dean Cox's cross.

Barry Corr thundered in a half volley before David Mooney headed in to level up the aggregate score once more.

But Southampton loanee Reeves struck in the 90th minute to send the Shrimpers to their third final in the JPT.

Both of those final appearances - in 2004 and 2005 - came at the Millennium Stadium in Cardiff and ended in defeat.

Orient have never been in the final of the competition, but showed their hunger when Batt's goal, smartly steered into the corner, cancelled out Ryan Leonard's strike from the first leg.

Corr re-established the lead before the break, lashing in Britt Assombalonga's knock-down from Kevan Hurst's free-kick, before Mooney powered in a header for his 12th of the season and an Orient equaliser.

The O's grew in confidence and almost took the lead for the first time through Batt, but he struck the bar when stretching for a Dean Cox cross.

But it was 21-year-old Reeves, who may not be at the club when the comes around as his loan expires at the end of the month, who stole the glory, directing in Hurst's low centre to spark joyous scenes and a pitch invasion after the final whistle at Roots Hall.

"I've never really got to a cup final. I played in the Scottish equivalent of this competition once.

"Wembley will be nice. I'm pleased for everybody involved at Southend. It's been a tricky six years for them.

"This is a special night and hopefully the Wembley game will be special as well."