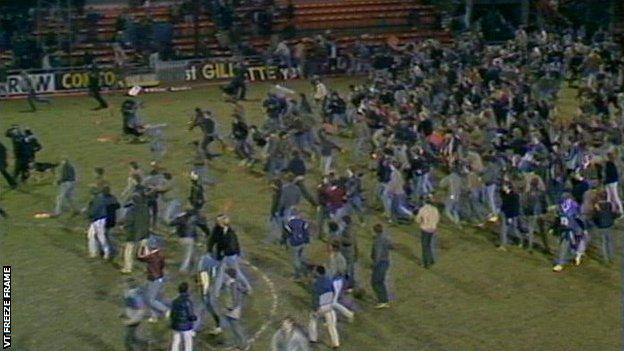 The glory days of Luton Town are prefaced by a grizzly evening of violence in 1985.

An FA Cup sixth-round tie against Millwall on 13 March that year is barely remembered for the Hatters' 1-0 win, but more for being the most vivid and plaintive example of 1980s football hooliganism.

The Kenilworth Road riot, as it became known, saw hordes of supporters from the Millwall end of the ground aggressively make their way into home areas and onto the pitch, before facing off against police officers.

"That night was a bad dream," David Pleat, Luton boss at the time, told BBC East Sport ahead of the sides' fifth-round encounter on Saturday.

"It was frightening because one eye was on the people getting injured around you, people being pelted with billiard balls, the poor people in the tunnel, bleeding, being led away by the ambulance men.

"They stormed the gates and pushed our supporters down to the front and then they took over the seats where our supporters were waiting for the game to start."

"It was sad and amid it all there was some glory for Luton Town, but that was downplayed because people only spoke about the riot."

Mick Harford, a member of Luton's team that night, recalled: "I saw their faces but I didn't understand why they would want to do it.

"When we went out to warm up you could sense the atmosphere wasn't good. We came off three or four times. It was quite horrific in all honesty.

"It is something that will go down in Luton and Millwall's history and nobody's proud of it."

The numbers tell most of the story: 47 were injured, 33 of them police officers; 31 arrests were made, leading to 29 being charged; £15,000 of damage was done inside the stadium; and £45,000 worth of damage was done on a train going back to London.

Pleat, despite the ugliness unfolding around his team, led the Hatters to their first FA Cup semi-final in 26 years.

"It was frightening because one eye was on the people getting injured around you, people being pelted with billiard balls, the poor people in the tunnel, bleeding, being led away by the ambulance men," he said.

"I went to an inquest the following day at the House of Commons with the chairman and local MP.

"It wasn't just Millwall supporters, it was groups of people who had converged at St Pancras station and decided to come to Luton that night to cause problems.

"They stormed the gates and pushed our supporters down to the front and then they took over the seats where our supporters were waiting for the game to start.

"The great sadness was Luton lost one third of their season-ticket holders - most of them left and never came back."

The scenes triggered a national debate led by then Prime Minister Margaret Thatcher, who wanted English clubs to bring in a membership card scheme.

Millwall were fined £7,500 by the Football Association and Luton were told to erect fences around supporter areas.

However, all of those punishments were overturned on appeal, provoking anger from the then sports minister Neil Macfarlane.

Luton chairman David Evans then decided to ban away fans from the ground for the next four seasons, a move which saw them banned from the League Cup in the 1986-87 campaign.

"We became very unpopular because we didn't have away fans," said Pleat, who left Luton in 1986 for spells in charge at Tottenham and Leicester before returning to Kenilworth Road in 1991.

"It was too dramatic. We were only Luton, we weren't Manchester United, so we weren't a club that could get away with anything out of the ordinary."

"At least he was doing something about it," he said.

"I can't say whether it was right or wrong but he made a stand and believed it was the right thing to do.

"It made it a lot easier for us as players. It's a lot easier when there are no away fans cheering their team on. It was a sad period of football."

The pain of being associated with one of English football's darkest nights rankles with Luton fans, but possibly not as much as the attention it took away from their feats later that decade.

Quotes from the time

Immediately after the game David Pleat said: "The players deserve credit for keeping their heads, and the referee deserves credit for not buckling. But judges and magistrates have only a certain limited licence to deal with the hooligans. The government must give them more power."

Prime Minister Margaret Thatcher led an informal inquiry and said: "The time has come for the courts to impose sentences which may deter those who are minded to use violence at or near football grounds."

John Carlisle, MP for Luton North, said: "We must, I believe, inflict upon these hooligans the sort of physical pain that they last night inflicted on others."

Leslie Curtis, chairman of the Police Federation said: "The time for talking has passed. Radical changes are now needed."

The Hatters lost narrowly to Everton in the 1985 semi-final, and were beaten at the same stage by Wimbledon three years later.

In 1988, the club won the League Cup, their only major trophy, and would have entered the Uefa Cup, had English clubs not been banned from European competition following the Heysel Stadium disaster.

Those were great days for Luton, whose - courtesy of administration, mismanagement and heavy points deductions - has reduced their standing to that of a frustrated non-league club longing to regain its Football League status.

This year's FA Cup run, which has taken in the giant killings of and has offered some respite.

"The 80s was a tremendous time for Luton and it was masked by one of those silly events. It was crazy," said Pleat.

"Sometimes I feel like the club doesn't want to remember that.

"They wouldn't really recognise or understand what a great period it was in the history of the club. But they should do now because the last 20 years have been pretty miserable.

"The biggest problem they've got is the ground and what David Evans did, after I left, was to sell the ground. They got out, took their money and the club will never recover from that."

Harford has a long-lasting connection with Kenilworth Road, having played for the club and then returned to manage them between January 2008 and October 2009, a period that included the club's relegation from the Football League after they received a 30-point deduction.

For him, Luton against Millwall in the FA Cup will evoke memories of violence, but also a happier time for the 127-year-old club.

"The Luton-Millwall incident is going to get highlighted with the upcoming game," he accepted.

"Luton Town have had highs and lows and been either end of the scale. I've won trophies with Luton and been at the club when they were deducted 30 points.

"The late 80s was the golden time of Luton's history with the best squad they've ever amassed. At the moment I feel so sorry for the fans, which is the result of previous mismanagement."

Or, as Pleat puts it, the shadow of the Kenilworth Road riot should not be allowed to loom over Saturday's game, when both teams will be focused on a place in the quarter-finals.

"Fans will think about it but they mustn't dwell on it," he said.

"They should dwell on the Luton that was and hope that will become the Luton of the future."