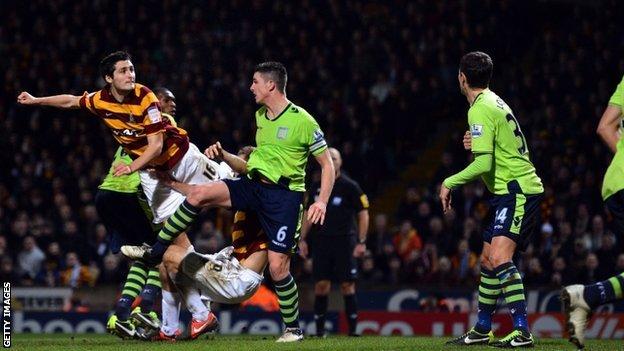 If you ask Bradford defender Carl McHugh about his actions in the seconds after Bradford secured their Capital One Cup be prepared to hear a long, pleasant but slightly embarrassed laugh.

As the final whistle sounded at Villa Park on 22 January, the 20-year-old Irishman inexplicably ran towards referee Phil Dowd and promptly hugged him.

It was a spontaneous action that McHugh cannot explain even now but it can certainly be excused as the Bantams became the first fourth-tier side since Rochdale in 1962 to reach the League Cup final. It is a huge, monumental achievement.

McHugh played in the victories over Wigan and Arsenal as well as both legs of the tie against Villa, a spectacular sequence that was inconceivable when the Irishman was released by Reading last season.

"It was difficult after I was released," McHugh told BBC Sport.

"It was an uncertain time, I wasn't sure I would find a club but people told me to keep my head up and keep going."

The central defender had moved to Berkshire at the age of 16 and, at the end of his two-season scholarship with the Royals, signed a one-year professional deal. But he is the first to admit that he never really got near to the first team and was loaned out to Swindon Supermarine and Dundalk before his release.

McHugh, a keen Gaelic footballer as a youngster, eventually had a successful trial at Bradford, becoming the only one of 12 players released by the Royals last summer to agree a deal at a Football League club.

"We thought he was a youngster who could develop with the club, but he has gone far above our expectations," Bantams boss Phil Parkinson said.

After signing, the Irishman had to be patient, making just two appearances before injuries in the centre of defence resulted in his introduction at the start of the second half at Burton on 27 October.

"The next game was against Wigan, and is my favourite game for the club," added McHugh of the Capital One Cup tie. "I was thrown into what was a big game and I had to show I could hack it. We drew 0-0 after extra-time, won on penalties and I played pretty well."

Injuries to Luke Oliver and Andrew Davies gave McHugh his chance and he went on to form a strong central defensive partnership alongside Rory McArdle.

An injury against Brentford in late December saw McHugh temporarily sidelined but he was back for the first leg of the semi-final tie against Villa, scoring with a late header to put the seal on a famous 3-1 victory.

It was part of a commanding sequence of games that led to him being named the Football League Young Player of the Month for January - and that header on an emotional night in West Yorkshire remains the highlight of his fledgling career.

"There are not many players who attack a ball as bravely as he does to get a goal and that was typified with his goal against Aston Villa," added Parkinson.

"When the ball is in the opposition box he puts his head where angels fear to tread."

McHugh rates the final minutes of the second leg at Villa Park as his most agonising in football, as the home side besieged the Bradford goal in search of the goal that would have taken the tie into extra-time.

The relief was matched by the joy as the final whistle sounded, but McHugh's post-match celebrations were interrupted when he was required to give a urine sample.

McHugh, draped in a Donegal flag after the match, initially had trouble complying with the request and it was midnight by the time he left the ground. His mum, dad and various friends from back home were waiting.

The defender is from the small village of Lettermacaward in Donegal, which has two shops and three pubs.

What they say about Carl McHugh

"The cup run has been great for the village," said McHugh.

"Everyone knows everyone and the people there have been able to watch me on TV in a few games."

McHugh's hero growing up was goalkeeper Shay Given, who is from up the road in Lifford and was in goal for Villa when the Bradford defender scored.

Not surprisingly, since reaching Wembley McHugh has been inundated with ticket requests from family and friends, to the extent that he has given his parents responsibility for organising them.

There will be an estimated 100 people coming over from Ireland for the game - but whether they see McHugh in action is another issue.

Andrew Davies is fit again, while experienced centre-half Michael Nelson joined from Kilmarnock in January, the net result of which is that McHugh has not started the last three games, and appeared as a substitute just once.

"It is good for the team to have more options but it makes it tougher to keep my place in the team," he said.

A cagey Parkinson said: "He can certainly handle the pressure, no doubt about that. He's vying for a place."

McHugh's only other trip to Wembley came when he watched Reading take on Swansea in a pulsating Championship play-off final in 2011.

The Swans were victorious that day, and a gap of 71 places between the Welsh side and Bradford suggests they will be once again on Sunday.

But this time McHugh is determined to be more than an interested spectator - and help Bradford ensure that one of football's great romantic stories has a fairytale ending.