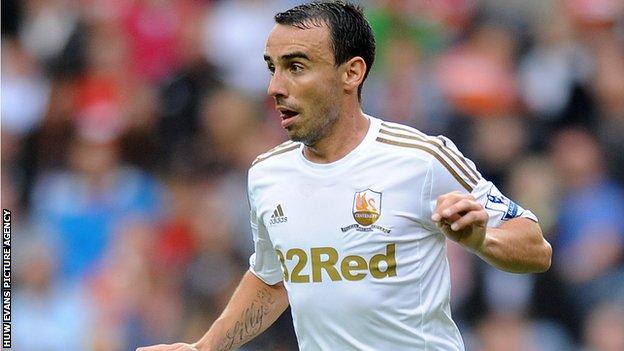 Leon Britton is the latest Swansea City player to be rewarded with improved terms and a year's contract extension.

Midfielder Britton, who first joined the Swans in 2002 when in the club were in the bottom tier, follows striker Michu and winger Wayne Routledge in signing a new contract in recent weeks.

"I'm delighted. I know I've said it before, but I'd love nothing more than to finish my career here," he said.

"It's been my life for the last 10 years, apart from a six month sabbatical at Sheffield United, of course, and there's no other place I'd rather be playing my football."

Britton has established himself as one of the Premier League's most accurate and prolific passers since joining the top flight in 2011 following Swansea's promotion through the Championship play-offs.

He has made over 400 appearances for the club, has represented them in all four divisions and is set to play in the club's first major cup final when they meet Bradford City in the Capital One Cup in Wembley on 24 February.

"The target for me has always been 500 appearances,'' he added. "That will really be something special for me.

"I'd like to think I can keep performing regularly in the first team for a few more seasons yet. It's probably for others to say, but personally I believe I am playing the best football of my career."

Britton first joined Swansea on a season-long loan in December 2002 - on the advice of fellow West Ham academy graduate and current England international Frank Lampard - when the Welsh club were in Division Three.

He played in the famous 4-2 victory over Hull City on the final day of the season that saved the club from relegation to the Football Conference, and signed permanently for the club shortly afterwards.

The former Arsenal trainee stayed with the Swans until June 2010 when he left to join Sheffield United on a free transfer.

"I never expected things to turn out the way they have when I returned from Sheffield two years ago," he said.

"The club was in the Championship at the time and there was certainly no guarantee of promotion. But we went straight up into the Premier League, have established ourselves in our second season and we are now looking forward to our first major cup final."

Britton is an injury doubt for Swansea's home match with QPR this Saturday, after injuring his ankle against West Ham.

A scan showed no ligament damage, but he has bruising and swelling and may not be fit in time for the visit of Harry Redknapp's side.