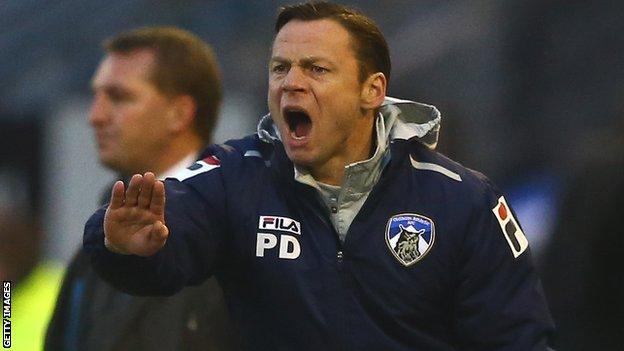 Oldham Athletic have confirmed the departure of manager Paul Dickov, who has left his role at Boundary Park following a poor run in League One.

His decision comes a week after

Chairman Simon Corney said after that game that Dickov was to turn league results around.

The former Arsenal, Manchester City and Leicester striker, who was in his first managerial role, took charge of Oldham in June 2010.

He led the Latics to final positions of 17th and 16th in his two full seasons at Boundary Park.

And Saturday's defeat to the Saddlers, Oldham's eighth loss in nine league outings, left the Latics one place and one point above the relegation zone.

But Dickov was in defiant mood when he spoke to BBC Radio Manchester after Saturday's game at the Banks's Stadium and was confident he would oversee a change in fortunes.

"I'll make sure I scrap and scrap until we get ourselves out of this mess."

Corney believes Oldham's players must take a sizeable portion of the blame for their slide down the table in recent weeks.

"Everybody knew we'd been suffering with our results in the last six or seven weeks," he told BBC Radio Manchester following the announcement. "In football, you're always under pressure.

"It's not an easy day because I'm so fond of Paul. Out of all the managers I've had and all the departures I've had to endure, this has definitely been the hardest.

"The game against Liverpool was my best day involved with the Latics, and a week later I'm parting company with the guy who gave me that best day.

"I truly believe Paul will go on to be a top manager.

"A combination of factors worked against him. I think he's been let down by the players. People will say I shouldn't say that in public, but it's true. The team that played against Liverpool - where were they on Saturday?

"I want to stay in League One. That's more important than beating Liverpool and beating Everton. I want to see effort from the players and I think they've got a lot to answer for."

Chairman Corney added that he had received around 25 applications for the job within two hours of Dickov's departure being made public.

Reece Wabara, who scored the winning goal for Oldham against Liverpool before joining Blackpool on loan on Wednesday, tweeted: "Sad to hear that Paul Dickov has left Oldham. Top manager for me and I have ultimate respect for him."