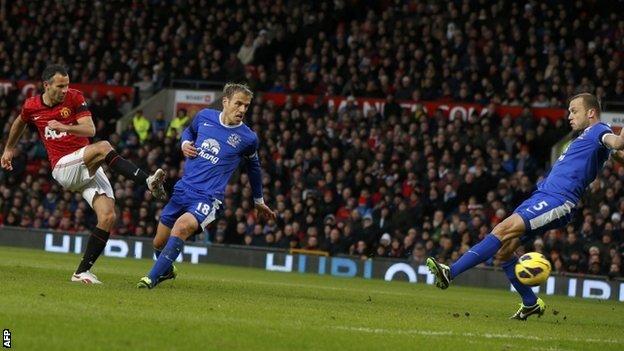 Manchester United extended their lead at the top of the Premier League to 12 points with a routine victory over Everton at Old Trafford.

Sir Alex Ferguson's side took full advantage of champions Manchester City slipping up at Southampton on Saturday evening to open up a commanding gap as they go in search of their 20th title.

United made few concessions to Wednesday's last-16 Champions League meeting with Real Madrid in The Bernabeu as a strong starting line-up closed out another crucial win with few alarms.

"That'll do it for Manchester United. What a weekend they've had. 12 games to go, 12 points clear and it is almost impossible to envisage them throwing this away. It is becoming a procession to the Premier League title."

Real coach Jose Mourinho watched from Old Trafford's directors' box as Ryan Giggs scored for the 23rd successive top-flight season to give United an early lead and Robin van Persie added his 23rd goal of the season just before half-time.

Everton never looked likely to repeat last season's feat of clawing back a two-goal deficit to draw 4-4 at Old Trafford. That was a comeback that fatally damaged United's title chances but this time they never seriously threatened such a shock.

Manager David Moyes suffered a setback just before kick-off when experienced defender Sylvain Distin pulled out with a virus after feeling unwell in the warm-up, forcing the Scot to draft in John Heitinga after he struggled so badly in the 3-3 draw against Aston Villa.

United should have taken an early lead when the pair combined to open up Everton's readjusted rearguard. Wayne Rooney played in Van Persie, who rounded Everton keeper Tim Howard but proved his fallibility by striking the outside of an upright from the angle.

Everton did not survive a second time shortly after when Van Persie escaped the ponderous Heitinga in the area to set up Giggs, who scored from 12 yards via the inside of a post.

There was some hope for Everton as they enjoyed a spell of possession and Leon Osman brought a fine diving save from David De Gea with a 20-yard volley - but United struck crucially just before the interval to put the game out of reach.

Everton had played a dangerous game as Van Persie was caught narrowly offside on a number of occasions but there was no flag to rescue the Merseysiders as he raced on to Rafael's pass, evaded Howard once more and scored despite Heitinga's best efforts on the line.

The second half meandered tamely until the 65th minute when United's Jonny Evans was blocked three times in a goalmouth scramble, twice by Howard, who then saved spectacularly from Tom Cleverley.

It had been a relatively subdued affair but there was a burst of action as Van Persie screwed an effort wide at one end then Everton substitute Nikica Jelavic's low shot brought De Gea into the action.

Old Trafford was emptying long before referee Mark Halsey's final whistle and this increasingly looks like the weekend when United took an unassailable lead over their title rivals.

"It is only our fourth league defeat this season and I would say it is the only game where a better team has beaten us. We have got Leon Osman and Steven Pienaar, who we really rely on - and people like Leighton Baines - and we are asking a really big shift of these players because we can't change the team around too much.

"People talk about Everton starting slowly and having a good half a season not a full one and maybe that's because we are asking a small number of players to do that for a full season. But these lads have done brilliantly and we are still in a really good position.

"If you had given me two draws against Manchester United and two points I would have said that that was good but we have taken three points off them so that's even better although we are obviously disappointed we lost today.

"I think 12 points to make up [for Manchester City] against a club like Manchester United is a big gap. Football doesn't always go the way it is meant to but that does look like a big gap. It is difficult to predict what will happen in football but it is a big thing to be that amount of points behind at this time of the season."