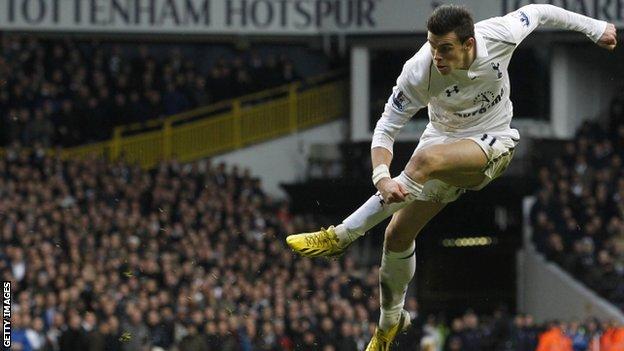 Bale gave Spurs a great start when he fizzed in a free-kick from 25 yards which beat goalkeeper Tim Krul.

Yoan Gouffran equalised midway through the half when his firm shot went in off a slight deflection.

But Bale made it four goals in three league matches when he ran onto Kyle Walker's ball before slotting in.

In fact, he is the only player to have scored for the north London side in those games, underlining his importance and value, both to the team and in monetary terms.

The 23-year-old international - who also scored for Wales against Austria on Wednesday - could have added three more to his tally late in the second half, only to be twice denied by the excellent reflexes of Tim Krul, before showing he is fallible by missing from three yards.

But his manager Andre Villas-Boas and his adoring fans inside a packed White Hart Lane would have forgiven him for that blip. He remains among the league's top scorers with 13 - impressive for a midfielder.

It must have felt like Groundhog Day for Newcastle when Bale scored inside the first five minutes, having conceded at Spurs during the same period last season.

The home side went on to hit Newcastle three more times in that opening 45 minutes, winning 5-0 in the end, but the Magpies are slightly more resolute outfit these days thanks to wise spending in January.

Nevertheless, visiting defender Fabricio Coloccini fouled Clint Dempsey 25 yards from goal on the right. Bale took charge and poked his effort with plenty of dip over the wall, into the bottom right.

Spurs were playing with Dempsey as the lone man in attack, with Bale, Aaron Lennon and new signing Lewis Holtby, making his first start, in support roles.

Germany international Holtby had great stamina and played with a willingness to cover the whole pitch.

But it is as an attacker for which he was purchased by Villas-Boas, and twice he had a chance to score from the fringes of the area with shot that just flew over the wrong side of the bar.

Moments later, another new signing kept his shot low enough to bring the Magpies back into the match.

Gouffran, signed from Bordeaux, was the man to level when Moussa Sissoko pulled the ball back for the forward to smash in via a deflection off the back of Michael Dawson.

The goal settled Newcastle down, with Tottenham not given the sort of space afforded to them in the first quarter of the match.

However, Alan Pardew's side were dealt a blow early after the restart when goalscorer Gouffran was carried off after receiving a nasty gash to his shin.

It seemed to unsettle the visitors as Tottenham attempted to grab a foothold in the match; Bale again leading the charge.

And it was the flying winger who ultimately decided the outcome when he latched onto a hopeful lofted ball from Walker and outpaced Stephen Taylor, before firing his shot past Newcastle's Dutch keeper.

The Magpies came close to snatching a point when substitute Shola Ameobi's strike was deflected wide, but that would have been cruel on Bale and Tottenham, who look a good bet to take a Champions League spot.

"It was a good win for the team. Newcastle were on a good run of form, so it was always going to be a hard game.

"We stepped it up in the second half and showed team spirit to get three points.

"Both sides had chances. We showed more determination in the second half and took control."

"Last year we were well beaten, but today we almost nicked an equaliser. Gouffran getting injured was a disappointment, as was the result.

"On this occasion, Bale was the difference. All the big moments came through him. He's in a rich vein of form.

"It was a good game of football. We tried to play and Sissoko produced another great performance."