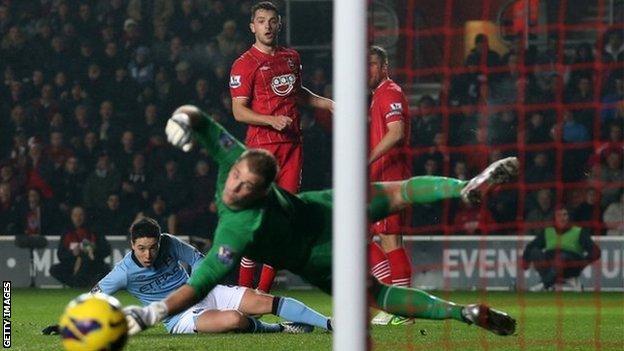 Manchester City's title defence suffered a huge blow on the south coast as they gifted Southampton victory with a series of glaring errors at the back.

Gareth Barry gave the ball away for Saints' first goal, with Jason Puncheon following up to slot home after Jay Rodriguez's shot was saved.

Steven Davis made it 2-0 after Joe Hart made a hash of Rickie Lambert's shot.

Edin Dzeko replied on the break but City's misery was complete when Barry inexplicably passed into his own net.

It was a disastrous defeat for Roberto Mancini's men, which means leaders Manchester United can extend their lead at the top of the Premier League to 12 points with 12 games to go if they beat Everton at Old Trafford on Sunday.

Saints, meanwhile, move six points clear of the relegation zone. They thoroughly deserved their first win under new boss Mauricio Pochettino but this is a game that will be remembered for City's defensive horror show, coupled with careless passing and lethargic attacks, which leaves their hopes of retaining their crown in tatters.

City had arrived at St Mary's with the best defensive record in the top flight but, in the absence of captain Vincent Kompany and his regular partner Matija Nastasic, they showed precious little authority in their back-four.

Javi Garcia, usually a defensive midfielder but being used at centre-back, was particularly uncertain with his positioning, and Saints punished him ruthlessly when they took the lead after seven minutes.

Puncheon stole the ball off Barry and, when Garcia joined Joleon Lescott in closing him down, played in Rodriguez in space on the edge of the area. Hart saved his effort but Puncheon had continued his run and rolled the rebound into an unguarded net.

Southampton's industry and discipline did not allow City any opportunities to respond and things got worse for the visitors when the usually dependable Hart made a shocking error, dropping Lambert's shot and letting it squirm between his legs for Davis to turn it over the line.

Saints' tactics were simple - press high up the pitch and attack with pace when they forced mistakes. It almost brought them a third goal, when Rodriguez volleyed narrowly wide, before City finally found some rhythm before half-time.

They replied with a classic counter-attack, started by Dzeko when he headed a corner clear on the edge of his own area, and finished by the Bosnian too after he slid in to scoop home Pablo Zabaleta's cross.

That gave City hope of staging another comeback similar to the one they mounted at the Etihad on the opening weekend of the season when they trailed Saints 2-1 but won 3-2. In truth, they never came close to a repeat.

Saints could have had a penalty before the break when Yaya Toure appeared to barge Rodriguez over in the box, but referee Martin Atkinson awarded a corner instead.

That decision did not make a difference in the end as the final blow was administered by their own hand or, to be precise, Barry's left foot.

There was no danger and no-one near Barry when Lambert's cross reached him in the middle of City's area but his attempt to play the ball back to Hart resulted in him placing the ball into the bottom corner of his own net instead.

Mancini threw on James Milner, then Aleksandar Kolarov and Maicon to try to find a way back into the game, but to no avail. His side were short of ideas and energy, and were out-passed and out-played.

The closest City got to pulling another goal back saw Sergio Aguero denied by Artur Boruc's instinctive save, and the game ended with Saints looking more likely to extend their lead than surrender it.