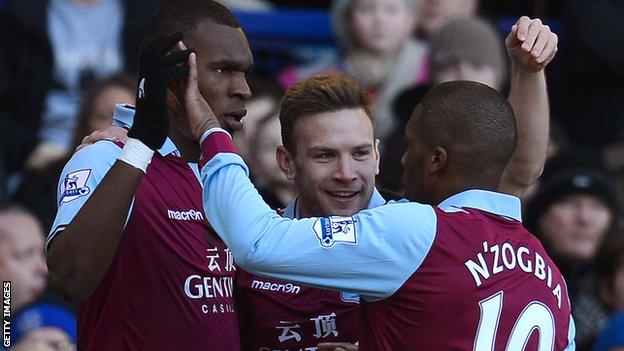 It has been a winter of discontent at Villa Park, one that has seen one of England's grand old clubs drop like a stone.

The results have been worrying, the crowd restless and Aston Villa have increasingly felt the eyes of the game trained on their perilous plight. The transfer window came and went with only the additions of little-known defensive midfielder Yacouba Sylla from French second division side Clermont Foot and Simon Dawkins on loan from Spurs.

Predictions abounded that Villa were for the drop, a young, fragile side lacking the stomach for a battle. Former players have expressed their fears; ex-bosses have spoken out.

And yet, their performance at Goodison Park on Saturday suggested something else. A new month brought with it new hope.

It was as if Paul Lambert's side had wiped the slate clean. From the moment referee Mike Jones blew his whistle, Villa's young midfielders snapped at the heels of their Everton counterparts, while the attacking talents of Christian Benteke and Gabriel Agbonlahor were a threat throughout.

It is impossible to ignore the fact that Villa led 3-1 with 20 minutes remaining and failed to win, but to focus only on that is to take a simplistic view of the game. Only Chelsea have won at Goodison Park this season and yet Villa came within two minutes of doing just that.

While the inexperience, individually and collectively, of players such as Ciaran Clark, Matthew Lowton and Ashley Westwood has been reflected in results and anxious performances, there were signs of maturity at Goodison.

Lambert is a realist and after the match spoke of the need to address what remains the worst defensive record in the top flight, with 49 goals conceded in 25 matches and just three points from the last eight games. Villa remain in 19th place, four points ahead of bottom club Queens Park Rangers and two points from safety.

But amid the routine expressions of determination in the post-match news conference was a note of genuine optimism.

"We should have won the game, so of course I am disappointed," he said. "But the lads gave everything. They were courageous and fought for everything. If we keep playing like that we will get results."

When Lambert left Norwich to succeed Alex McLeish at Villa, he could not have imagined that seven months later he would be dealing with votes of confidence from the boardroom and mutiny among a small section of supporters, or find his side in the relegation zone, with defeats by League Two opposition in the Capital One Cup and a Championship club in the FA Cup to add to the mix.

But having been told by club owner Randy Lerner that his position is secure, he is - at least on the evidence of the past two matches - starting to steady the ship.

December saw an 8-0 defeat by Chelsea, a 4-0 loss to Spurs and a 3-0 Wigan win at Villa Park. January was arguably more chastening still, with defeats by fellow strugglers Newcastle and Southampton and not a single league victory to be seen.

But having fought back against Newcastle in midweek, albeit to lose 2-1, and drawn 3-3 against Everton, Villa's situation seems somehow less hopeless already.

"They kept going and going at us," Everton manager David Moyes said. "They had chances and they have got that threat, even if they might suffer a little bit the other way. They look as if they are a bit happier away from home than they are at home, when they can play on the break. Maybe the expectations aren't quite as high away from home."

There is no question the results have affected the players' confidence, and maybe the manager's too. But if Benteke and Agbonlahor continue to perform as they did here and Lambert can ally defensive organisation to the energy on show at Goodison, there may well be brighter days to come for Villa supporters.

Much will depend on the next six weeks, in which time Villa play West Ham, Queens Park Rangers and Reading. They also play Arsenal, Manchester City and Liverpool.

Moyes, whose side sit fifth and within four points of third, certainly saw enough to be impressed.

"Anyone who thinks Villa's front three can't cause you problems are wrong because they have some fantastic attacking players with power and pace," he added. "We were ready but just couldn't deal with it.

"Those players will give them every chance of getting out of trouble."