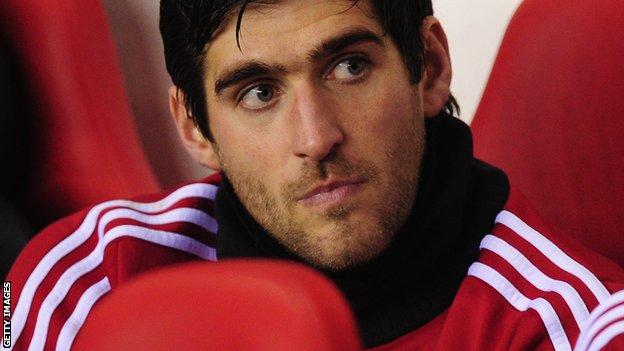 Michael Laudrup refused to be drawn on the future of Danny Graham following Swansea's 0-0 draw at Sunderland.

Graham was a second-half substitute against Martin O'Neill's side, who have been linked with a move for the striker.

It is understood Graham has asked to leave Swansea, although he has not submitted a formal transfer request.

"I don't know what's going to happen, let's see in a couple of days," Laudrup said.

"Let's leave it for a couple of days and then it's easier to answer all the questions afterwards."

The 27-year-old Graham has been linked with Norwich in addition to the Black Cats during the January transfer window.

Laudrup previously confirmed the Swans had received offers for the ex-Watford player, who joined the club for £3.5m in the summer of 2011.

Graham did not start at the Stadium of Light but Laudrup did not have any reservations about introducing him to the action with 15 minutes remaining.

"Obviously one of the teams mentioned is Sunderland and that's why I took the decision that he shouldn't start," Laudrup added.

"But I had no doubts whatsoever to put him on for the last 20 minutes and he did what he should.

"[He's] a great professional and I didn't have any doubts about that."

Graham could have secured victory for Swansea in stoppage time at the Stadium of Light, but his shot was blocked by Titus Bramble.

Manager Laudrup was pleased with Swansea's display in which they secured their fifth clean sheet away from home this season.

And the former Barcelona and Real Madrid player was also pleased with his side's reaction on their return to Premier League action following their Capital One Cup exploits.

The point saw Swansea move up to eighth in the table and only six points shy of the 40-point mark.

"Maybe we should have won but the reaction and performance overall from the team after what happened [over] the last week I think was great," Laudrup said.

"We played away against a good side and I don't recall even one major chance for them to score a goal.

"Yes, [they had] three, four, five corners and a couple of free-kicks but nothing else.

"I think that says a lot about the moment we are in right now that we can do that."