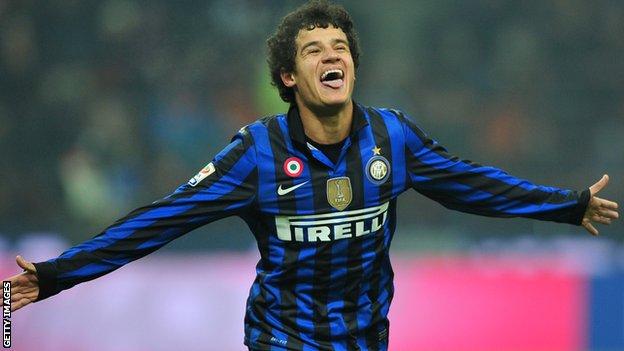 When Rafael Benitez introduced new signing Philippe Coutinho to the Italian media in the summer of 2010, he declared the Brazilian "the future of Inter Milan".

Sadly, the playmaker has failed to develop his reputation since then.

The 20-year-old remains a player for the future, rather than a star of the present, and Liverpool have taken a calculated gamble by agreeing an £8.5m deal for him.

Marco Branca, who conducts all transfers for Inter Milan, told BBC Sport: "Coutinho is a very, very good player. He is still only 20 and has a big talent."

Yet the fact remains that Inter's sporting director was willing to sell a player who was peripheral at best at Inter, having failed to cement a starting place or even establish his best position.

Branca now hopes to use the money received from Liverpool to sign another Brazilian, the Corinthians midfielder Paulinho.

Andrea Ramazzotti, who covers Inter for Italian newspaper Corriere dello Sport and has watched all Coutinho's 28 games for the club, told BBC Sport: "He just didn't show his potential in Milan.

"Coutinho played very well when he was on loan at Espanyol last season and started well for Inter this season, but they were only brief spells really.

"For the rest of the time, he just showed flashes of his potential and I fear the way of playing in England, which can be very physical, will not suit him because he has a slight frame."

That this is a player of rare talent, though, seems beyond question. The diminutive Brazilian is an excellent dribbler, combining close control with pace and trickery.

He also has finishing ability and can take a mean free-kick.

Coutinho joined Inter from Vasco da Gama for 4m euros (£3.4m) in 2008, when he was 16 and one of the most coveted young players in world football. The Serie A side immediately loaned him back to Vasco, because foreigners are prohibited from playing professional football in Italy until they are 18.

He returned in the summer of 2010 and quickly established himself as a favourite of new manager Benitez, featuring in 14 league and Champions League games before Christmas, most often as a wide attacker in a 4-2-3-1 formation.

Unfortunately for the player, Benitez was sacked in December and his successor, Leonardo, was not anywhere near as big a fan of the young Brazilian. He played only four more games that season, although he did finish on a high by winning the Fifa under-20 World Cup with Brazil in the summer.

New manager Claudio Ranieri sent Coutinho on loan to struggling Spanish side Espanyol for the second half of the following season. He impressed, scoring five goals in 16 appearances.

This was when Liverpool first showed an interest in the player. Benitez had told their director of football, Damian Comolli, that Coutinho was the best young player at Inter and capable of being a big success in the Premier League.

Inter had yet another new manager, Andrea Stramaccioni, by this time, though, their sixth during Coutinho's time at the club, and he wanted to keep the player, so Inter rebuffed Liverpool's offer.

Stramaccioni's faith looked like being repaid as Coutinho was player of the tournament in the pre-season Trofeo TIM tournament, when Inter beat AC Milan and Juventus in an impressive start to the season.

Everything looked promising until the player suffered a stress fracture of the tibia at the end of October. Fredy Guarin took his place and has remained in the side ever since.

This all made Liverpool's offer too good to refuse, as Branca decided to cash in on Coutinho's largely unfulfilled promise.

It will be fascinating to see whether the player can now finally reach his potential with Liverpool, or simply remain a great hope.