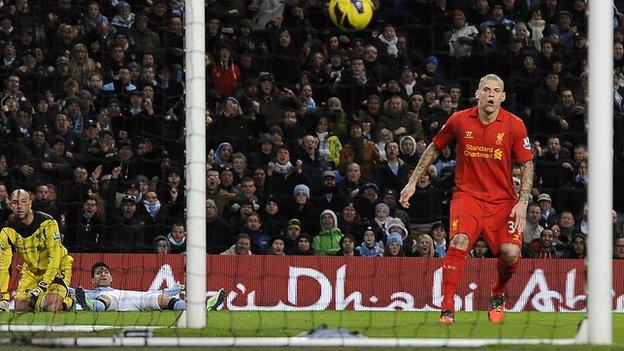 Manchester City now stand nine points behind Premier League leaders Manchester United after they were held to a draw by Liverpool at the Etihad Stadium.

Edin Dzeko gave Manchester City an early lead but a contested strike from Daniel Sturridge against his former club drew Liverpool level before the interval.

City appealed for a foul on Dzeko then waited for Liverpool to put the ball out of play with the striker lying injured. Liverpool, as they were perfectly entitled to do since no whistle came, played on and Sturridge's finish carried too much power for Joe Hart.

Steven Gerrard added to his catalogue of long-range strikes to give Liverpool a lead they deserved with 17 minutes left but Sergio Aguero's audacious strike from the tightest of angles as he battled with keeper Pepe Reina gave City a point.

Manchester City manager Roberto Mancini could have no complaints about the result as Liverpool showed the greater endeavour and energy for long periods, and his side now face an increasingly difficult task to claw back United's lead and retain their title.

City recovered a similar deficit to win the title last season but they are currently missing a vital spark which they must recover quickly to have any chance of closing that gap.

Liverpool manager Brendan Rodgers will feel encouraged by his team's display but will once again be left cursing their inability to protect a lead, a failing that also cost them at Arsenal in midweek.

Sturridge was the game's outstanding performer and shows signs of fulfilling all of his rich promise, but the other reality for Liverpool is that, as the calendar moves into February, they have yet to record a Premier League win against any team in the top half of the table.

Rodgers had been impressed with Liverpool's performance at Arsenal despite surrendering a two-goal lead and made only one change, replacing youngster Andre Wisdom with Jose Enrique.

A look at the stats

The hosts, missing injured captain Vincent Kompany and both Kolo and Yaya Toure who are away at the Africa Cup of Nations, were almost ahead inside the first minute as Reina had to react well to turn over David Silva's effort.

They took the lead after 23 minutes when Dzeko applied a simple finish to James Milner's low left-wing cross.

But the visitors were level six minutes later in circumstances Manchester City clearly considered unsporting. They first appealed for a foul as Daniel Agger clashed with Dzeko then waited for Liverpool to put the ball out of play as the striker lay on the turf.

They were frustrated on both counts - the more so when Sturridge took advantage of Javi Garcia's poor clearance to flash a 25-yard shot low past Hart. The Etihad expressed its displeasure but Liverpool were perfectly entitled to continue as referee Anthony Taylor chose not to stop play.

It was also telling that Dzeko made a swift recovery once the goal had been scored.

Liverpool ended the half on top as a breakdown in communication between Hart and Pablo Zabaleta ended with the defender sending an attempted backpass past the keeper and only inches wide.

City were struggling for any rhythm or momentum and it was no surprise when Liverpool took the lead with 17 minutes left. They did so in spectacular style, Gerrard picking up the ball 25 yards out and, as he has done so often in his wonderful career, drilling a low, unstoppable shot into the bottom corner.

If Gerrard's strike was a thing of beauty, Aguero matched it five minutes later. The Argentine won a race for possession with Reina outside the area before defying all logic to find the net from what looked an impossible position.

Both sides almost grabbed the winning goal in the closing minutes, substitute Maicon heading just over for City and Hart clawing away another 20-yard effort from Sturridge.

432 comments
Back to top
unknown