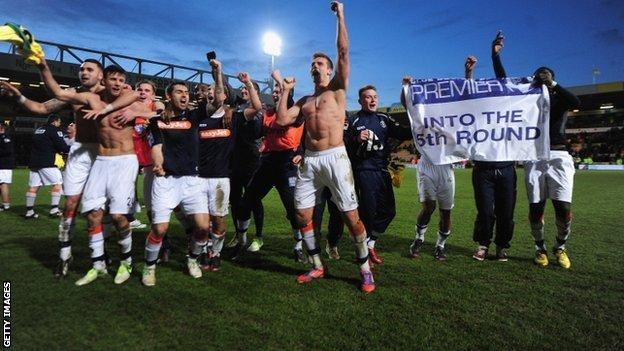 Few clubs have traversed the distance between the highest highs and lowest lows quite like Luton Town.

A team steeped in Football League history, top-flight past and FA Cup stories have spent almost a decade in the doldrums, enduring the last four years grappling with the concept that they are a non-league side.

But Saturday's glorious FA Cup giant-killing of Norwich City, the first time a non-league side have beaten a top-flight team in the Premier League era, puts them in the last 16 and could be the catalyst for reviving the Kenilworth Road club.

They reached their first and only FA Cup final in 1959 - beating the Canaries in the semi - and were a high-profile name in the 1980s with a series of notable exploits.

Luton's stunning 1-0 win over Manchester City at Maine Road in 1983 - complete with the comedy jig of manager David Pleat - still remains one of English football's great escape stories, as the Hatters avoided Division One relegation and consigned City to the drop.

It would get even better, as Luton went on to have their best ever season in 1987-88, finishing ninth in the league, reaching the FA Cup semi-finals and winning their first piece of major silverware by beating Arsenal in the League Cup final.

But the downs have outnumbered the ups since then. The descending spiral saw the Hatters go into administration on three separate occasions and rack up deductions totalling 40 points for financial irregularities, as they tumbled three divisions from the Championship to the Blue Square Bet Premier, where they have remained since 2009, in consecutive seasons.

"I don't consider them a non-league side," said Pleat. "They should be in the League, but aren't because of circumstances beyond the players' control.

"The most important thing is they can use this wonderful result as a catalyst to hopefully get up this season.

"If they get a good Cup draw where 40% of the net receipts goes to the club if they are away at a big boy like Arsenal, they will see that as a great achievement.

"It's a terrific achievement beating Norwich. The last three or four years, certainly since they were demoted, have been difficult ones. They cannot get that elusive win to take them up."

Luton fans have felt they were made an example of when the Football Association docked 10 points from them for paying third-party agents and a further 20 points for failing to satisfy insolvency rules in 2008.

The Hatters have held a grudge ever since.

"That will be a wonderful day for them - a revenge for what they see as an unfair punishment the club was handed. It was impossible for them to get back that terrible points deduction.

"The directors just after I left did a terrible thing. They sold the ground to the council. That was the crown jewels, and they don't own anything now."

For current manager Paul Buckle the priority is to regain Football League status.

The club, so far, has crumbled under self-inflicted pressure, losing in the play-offs in the last three seasons.

But, a historic victory over a Premier League side could be the event that helps throw off the shackles.

"The club's had some really bad days over the last few years. So I'm absolutely thrilled for the board, the fans and the players. Hopefully now this will make us all believe that we've got a really good squad," said Buckle, who took Torquay into the Football League in 2009.

"It was something I was keen to do when I came in. There are pictures on the wall at Kenilworth Road - we're very aware of our heritage and history.

"But we're keen to add to it. Against Norwich we have. Hopefully now everyone can start believing we are good enough. Now it's about using this for confidence and maybe adding one or two players.

"I have to keep trying to take the club forward."