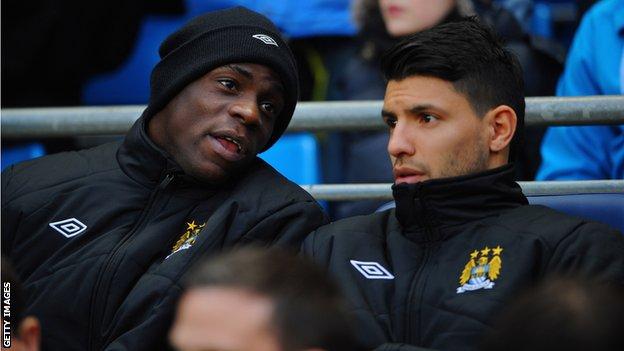 Manchester City assistant manager David Platt has said Mario Balotelli will not be moving to AC Milan this month, despite reports in the Italian media suggesting negotiations were under way.

"I don't think anything is going to happen," said Platt of a proposed January move involving the striker.

AC Milan's spokesman, Riccardo Coli, described stories linking the club with the 22-year-old as "only rumours".

Last week reports emerged that a loan bid from the club had been rejected.

But City manager Roberto Mancini said on Friday that the Italian, regularly linked with a return to Italy since he arrived in England in 2010, will not leave the club.

"It is not true. Mario stays. We didn't have any requests about Mario or other players," said the 48-year-old.

The Italian also stated it would be "difficult" to buy new players with the transfer window set to close next week.

"I don't know [if City will buy anyone] but we don't have enough players," he added. "We are 18 players now. We can't sell any players."

Balotelli - who has scored one league goal in 14 appearances this term - has courted controversy throughout his time in England, with the latest incident involving a training ground bust-up with Mancini at the start of January.

AC Milan vice-president Adriano Galliani had stated that if City were to lower their valuation then a move could occur, but Mancini - who expressed his frustration with the furore surrounding Balotelli - insisted the Italy international remained part of his long-term plans.

"Mario has another three years on his contract," he replied when asked about the ex-Inter Milan player's future.

Mancini was similarly dismissive of another article that argued director of football Txiki Begiristain has stipulated that City play in the 4-3-3 system favoured by the Spaniard's former club Barcelona next season and all future signings will be purchased with that formation in mind.

He said: "I don't know but I speak with Txiki every day and he never told me this and we have the same thoughts about football and it's not more important to play 4-3-3, 4-4-2 or 4-5-1, it's important to have good players.

"We are agreeing about everything because we think the same about football. We are the same. We don't have a different view."