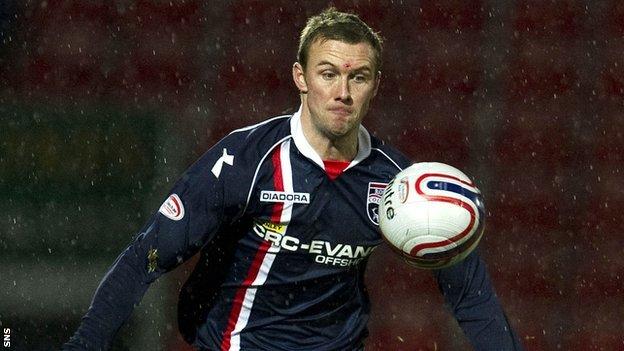 Morton have bolstered their attack by signing freed striker Colin McMenamin until the end of the season.

McMenamin was top scorer in Division One last term as he helped Ross County win promotion, but he has netted only once for the Staggies this season.

His style of play has always impressed me

"He's a penalty-box player, but he works hard outside the box as well," Morton boss Allan Moore told the BBC.

"He will be hungry for success again because he is here on a short-term deal."

Morton are McMenamin's 11th club, with Shrewsbury, Livingston, Dundee and Queen of the South among them before his move to Dingwall.

Moore's side lead the First Division by five points. Partick Thistle are second but have two games in hand, while Dunfermline are a point further back with one game in hand.

With a groin injury keeping the club's top scorer Archie Campbell out for six weeks and fellow striker Peter MacDonald not long back from a six-month lay-off, much of the burden has fallen on stocky goalscorer Peter Weatherson.

The addition of McMenamin, with a scoring ratio across his career of a goal every three games, gives Moore something different up front.

"Hopefully between now and the end of the season he will put in a few goals and help us stay at the top of the league," said Moore, who enjoyed promotion success at Stirling Albion.

"I was quite surprised we got offered him because I think he has played 19 games for County this season.

"It's very difficult being at the bottom end of the Premier League to get chances when you are a centre-forward.

"If he bangs in a few goals we'll be looking to offer him a deal. If that deal is not good enough for him, his goals ratio should help get him a move somewhere else.

"It's a win-win situation. We get his services until the end of the season, he is getting a platform to show he can still put the ball in the back of the net.

"His style of play has always impressed me. He is a worker, he can run channels. He can play that lone striker role. We are hoping he can help us get promotion."

Morton's season has been transformed after a shaky spell earlier in the season when they slid down the table.

Their plight was not helped by Mark McLaughlin being suspended, Martin Hardie getting injured, MacDonald's lengthy lay-off and a knee injury sustained by Kevin Rutkiewicz.

But, with these players back and Michael Tidser and Fouad Bachirou impressing in midfield, Moore feels McMenamin's signing puts them in a strong position to maintain their promotion challenge.

"It sends a message to the other teams in this league that we mean business, that we do want to go on and win this," added the manager.

In an unusual move, Morton tapped into the local business community in Greenock to help fund the acquisition of McMenamin, with Inverclyde bus operator McGill's paying part of his salary.

"McGill's came up with an offer to pay his wages. That's a great gesture because if they didn't do that I don't think we'd have got him in," explained Moore.

"I think the fans will be delighted. They have been screaming out for us to get another striker in."

Having their new signing sponsored means there is less pressure on Morton to sell any players in the January transfer window and he is confident key midfielders Tidser and Bachirou will remain at Cappielow.

"We would not stand in anyone's way at this club, but I think they are enjoying it here and that they would prefer to stay and try to win a championship medal," he said.

"If they play well until the end of the season, they will have offers in the summer."