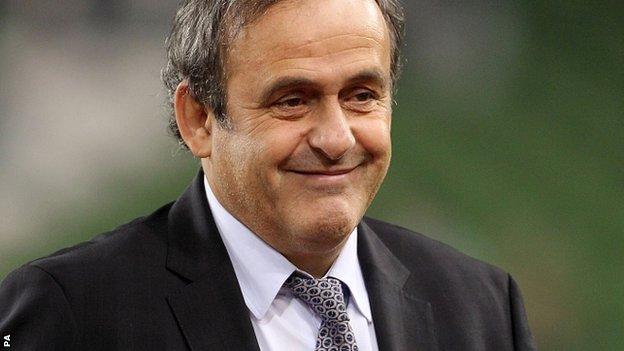 Uefa president Michel Platini says match-fixing is the biggest threat to the future of football.

He also praised AC Milan's Kevin-Prince Boateng for walking off the pitch in protest against racist abuse.

"If tomorrow, we go watch a game already knowing the outcome, football is dead," said the 57-year-old.

"Racism, violence do not affect just soccer but the public. On the other hand, we're directly concerned by match-fixing. For me, this is the big shame."

In an interview with French radio RTL, Platini also talked about the 2022 World Cup, video technology and the financial fair play rules.

In June, Platini, a three-time world player of the year, said any players who walked off the pitch at Euro 2012 because of racial abuse would be booked.

However, he congratulated Milan for walking off in a friendly against Italian lower division club Pro Patria because of racist chanting.

"It was wonderful," he said. "I really liked it a lot. I even called AC Milan to congratulate them."

It follows Fifa president Sepp Blatter's comments that teams could face points deductions or even relegation if guilty of discrimination, but Platini added that Uefa had already put rules in place should racial abuse occur during a match.

"If they hear racist chants, there is an appeal for them to desist over the public address system and the match is stopped for a minute," he said.

It's 50C in the summer in Qatar. If we do not change the date there are countries that will never receive the World Cup

"After that if the chanting resumes there is a stoppage of two minutes and a new appeal for them to stop.

"A third time and the referee can call the match off. It is the referee who is the boss in the stadium."

Platini, who has been head of Europe's football governing body for six years, says he "will fight" for the 2022 World Cup in Qatar to be held in winter.

There are fears players will struggle to cope with the heat if the tournament took place in the summer.

"It's 50C in the summer in Qatar. If we do not change the date, there are countries that will never receive the World Cup."

With regards video technology, Platini reiterated his stance that rather than spending money on the equipment, he would prefer to use the funds to invest in football in "countries that need it".

Goal-line technology is being developed by Fifa to avoid controversies such as the failure of the referee to spot that Frank Lampard's shot had crossed the line when England lost to Germany in the 2010 World Cup.

Fifa used the technology in the opening game of the Club World Cup in December for a match between Japan's Sanfrecce Hiroshima and Auckland City.

"It costs a fortune," he said. "Fifty million euros over five years. Football has been the most beautiful sport in the world that has been built over 150 years and in some ways I do not see how video can bring more."

The France legend, who scored 41 goals in 72 appearances for Les Bleus, added that the financial fair play rules are in place to protect clubs.