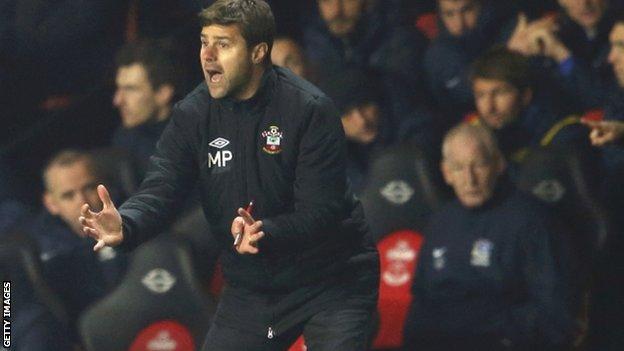 Saints created a host of chances in a bright first-half display that bore the hallmarks of the Argentine's preference for a high-tempo, pressing game.

If anyone is under the impression that Southampton would implode as manager, it would seem that they are seriously mistaken.

But how did Pochettino fare on his first game in charge?

If Pochettino was feeling nervous ahead of his first game as Saints manager he certainly did not show it in his opening pre-match column. In fact his ambition and desire came across.

He said: "Southampton is an attractive proposition. This club is an enticing project. I understand there are high expectations of this club, it does not scare me, in fact it thrills me." He signed off in Spanish: "Disfrutar del juego" - which means enjoy the game.

There was no mention of his predecessor Nigel Adkins anywhere in his notes, or indeed anywhere in the programme.

Who is Mauricio Pochettino?

Pochettino said in his first press conference on Friday that he had been "researching the team for weeks", so it was no surprise that there were no real changes or tinkering with his first team selection.

On paper this was near enough Southampton's first-choice XI barring the injured Adam Lallana, with Pochettino welcoming back record signing Gaston Ramirez and star striker Rickie Lambert. Tactically the side was set up exactly how Adkins would have done.

On the sidelines communication seemed a major issue, as Pochettino does not speak good English. Strength and conditioning coach Nick Harvey appeared to be helping to pass on instructions to the players. Towards the end of the game it appeared to become a signficant problem.

A crowd of 28,359 were at St Mary's to support their side which, on a cold Monday night and with the game on television, was a fine turn out. Chants of "there's only one Nigel Adkins" rang out at as the new manager emerged from the tunnel at St Mary's.

"Pochettino will be delighted. When you come up against a big side like Everton you don't want to get beat and in your first game you want to get a result and he's done that."

But, by and large, there was a positive atmosphere in the air with the Saints fans fully backing their side and ignoring the off-field events.

The so called 'white hanky' protest never emerged but a round of applause after 56 minutes, when there was a break in play due to injury, was in tribute to Adkins.

Pochettino, for what it is worth, seemed unfazed.

Busy on the touchline

Pochettino's behaviour in the technical area was a complete contrast of style to Adkins, with the Argentine spending much of the game patrolling it, barking orders and gesturing to his players.

Adkins used to spend large periods of the game sat down, but Pochettino appears to be taking a more hands-on approach.

The new boss became increasingly more animated as the game wore on and it is something that will take the Saints players time to get used to.

Pochettino kept the media waiting but when he arrived he was in great form and coped admirably with difficult questions about how Nigel Adkins had been treated.

Speaking through an interpreter, he paid tribute to the job Adkins had done and thanked staff, players and fans for their support over the previous three days.

There was also time for a joke with him responding to why Jason Puncheon had to leave the pitch temporarily in the second-half for a toilet break.

"Sometimes with a new manager, players get nervous," he said.