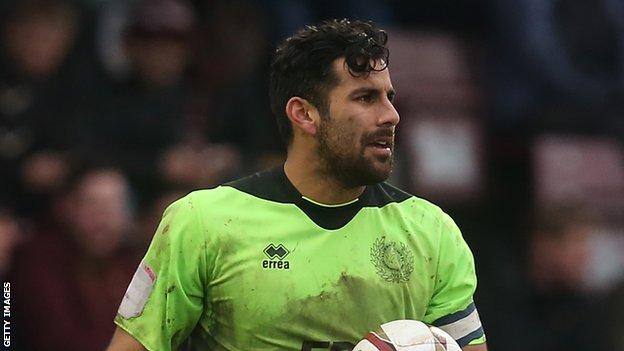 Aldershot keeper Jamie Young says the next month will define their campaign.

The Shots are three points above the relegation zone but have only lost one of their last seven league games.

The 27-year-old told BBC Surrey: "We are in the wrong place in the table but we have a great mentality and confidence at the moment.

"Hopefully we can use this period to springboard us into the second part of the season. I believe we definitely can do something."

He continued: "It all comes down to where we think we can go with this season.

We have always had a positive mentality within the group regardless of the results. If you create that atmosphere it helps you come through tough periods

"We know we have got the capabilities of winning games. We've proved that and we have to do that on a more consistent basis."

The Shots finished mid-table in League Two last season, but nine defeats in the opening 14 games of this campaign meant the side have been looking to pull themselves away from the foot of the table.

Their form at the EBB Stadium has picked up since they beat Rotherham in December, ending a run of almost three months without a home league win.

Young, who has been an ever-present in the league for the Hampshire club this season, says they did not let their early season struggles affect their mood.

"We have always had a positive mentality within the group regardless of the results," the Australian said. "If you create that atmosphere it helps you come through tough periods.

"We didn't have an incredible home record but recent form suggests we have overcome that. Our away record has been fantastic so it is a good place to be mentally, in terms of our results at home and away.

"When you are getting positive results it can only help spur you on."

Meanwhile, Young says that the dealings of manager Dean Holdsworth in the transfer window could prove crucial in the second half of the season.

Midfielder Oliver Risser and winger Anthony McNamee have moved to the EBB Stadium, while defender Guy Branston and striker Guy Madjo have departed.

"The manager has brought in some good players," Young added.

"Oliver Risser is an exceptional find - he was captain of a team that got promoted last season.

"There is a strength in depth [in the squad] that will improve our results even further."