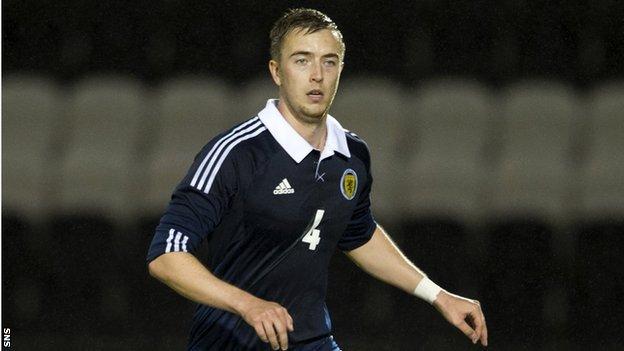 Hearts have agreed to sign the former Rangers defender Danny Wilson on loan from Liverpool until May, pending international clearance.

The Scotland defender, 21, has been on loan at Bristol City recently but played only one match due to injury.

"Danny is a quality player and someone we know a lot about," McGlynn told the Hearts website.

"Even at such a young age, he brings a lot of experience and not only will he be a very good addition to our squad, he will be a good influence on the young players we have here.

"He has been playing regularly down south so fitness won't be a problem, and hopefully it won't be long before we see him in a Hearts shirt."

Wilson is eligible for the under-21s and therefore fits the criteria set out by the SPL that allows Hearts to sign players.

The Tynecastle club had been placed under a signing ban last year due to late payment of wages and it was extended over a "remuneration default".

The default related to bonus and appearance monies but the SPL is now satisfied payments are in order.

However, the club can only sign under-21 players until the end of the season and they will be restricted to a one-out, one-in policy.

Ryan McGowan's departure to China allows Wilson to come to Edinburgh, but McGlynn can bring in another player after goalkeeper Peter Enckelman left at the end of his short-term deal.

If clearance comes through on time, left-footed Wilson will go straight into the squad for Saturday's match against Celtic.

He has been capped five times and made his international debut against the Faroe Islands in November 2010, a match in which he scored.

Wilson came through the Rangers youth set-up and played 26 games for the Ibrox side before Liverpool manager Roy Hodgson signed him for £2m in July 2010.

However, he has struggled to break into the first team at Anfield since and his loan to Hearts follows similar spells at Blackpool and Bristol City.