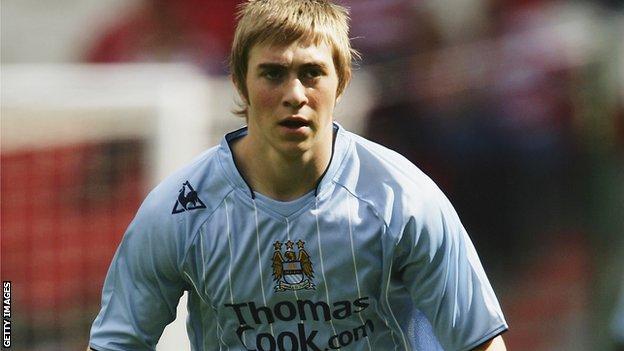 Dietmar Hamann had never been so certain that a young player would become a star.

"He was a fine passer with vision and an eye for goal," the German remembers of his Manchester City midfield partner Michael Johnson.

"But what really marked him out was this innate understanding of the game. I had never seen that before in such a young player."

Not bad when you consider that Hamann, a Champions League winner and World Cup finalist, had previously played alongside an emerging Steven Gerrard at Liverpool.

Hamann had forgotten two things that would be crucial to Johnson's progress, however - luck with injuries and the ability to deal with the pitfalls of life as a professional footballer.

Sadly, Johnson came up short on both counts.

City have revealed they released the central midfielder earlier this month, at the age of just 24. The announcement had been prompted by the emergence of a picture on Twitter, taken in a Manchester takeaway, showing a bloated and barely recognisable Johnson.

The story illustrates how precarious the life of a professional footballer can be.

Stuart Pearce, who gave the player debuts for City and England's Under-21s, believes the story serves as "a stark lesson" for all footballers.

"Until you have gone through the whole system and absolutely maximised your potential, it is very important to treat every game as preciously as you can," Pearce told BBC Sport.

Johnson was born in Urmston, south Manchester, in 1988, and signed schoolboy forms with Everton at the age of 12. After a brief spell on loan at Dutch side Feyenoord, he joined City in 2002 and emerged as the outstanding talent in an academy side full of outstanding talents, including Daniel Sturridge, Micah Richards, Joey Barton and Stephen Ireland.

He made his first-team debut in October 2006, impressing in a 4-0 Premier League win over Wigan, and played a further five first-team games that season.

But he really came to the fore the following season, under former England boss Sven-Goran Eriksson, who had replaced Pearce as manager at City.

What they say about him

"Michael played a lot and was a key part of my team," remembers Eriksson. "He really was excellent and everyone was sure he would be the next big star for England."

City had a resurgent season, beating Manchester United home and away and spending most of the first half of the season in the Premier League's top three.

A central midfield comprising the hugely experienced Hamann and youthful Johnson was a key part of the team's success, and the duo got on well on and off the pitch.

"Michael was a cracking lad and I suppose I took him under my wing," Hamann says. "He was quiet, but always behaved in the right way and the right manner and was a great team player."

Johnson might have been quiet, but he made a big impression on the pitch.

"I always say a special midfielder needs to have the main attributes - passing ability, a good engine, strong tackle, vision, intelligence - and to be absolutely outstanding with one of them," Hamann adds.

"I can honestly say Michael was outstanding in all these areas. The player he reminded me of was Michael Ballack [whom Hamann played alongside for Germany], because of his all-round ability, but also because he was so economical with his game.

"Most teenage midfielders charge around and don't understand the need to economise effort, be disciplined and adapt according to the circumstances of the game.

"For example, Stevie [Gerrard] had tremendous technical and athletic gifts, but when he first came through at Liverpool, his understanding of the game wasn't what it could have been. He would admit that himself.

"Michael was different though; he had this innate understanding of the game."

So far, so good. But then Johnson's startling progress was abruptly halted by injuries. He had a double hernia operation in 2007 and was troubled by a persistent groin problem throughout that season.

Several times he worked hard to return to fitness, only to break down again, sometimes with a completely different injury.

Mark Bowen, assistant to manager Mark Hughes at City from June 2008 to December 2009, remembers: "There was a point when Michael was back in the squad after injury, training very well, and there were high hopes for him.

"Then he did his cruciate ligament in a training game - just went down like someone had shot him. It was a freak accident and again it curtailed his career."

Johnson last played for City in October 2009, scoring in a 5-1 League Cup win over Scunthorpe. A season-long loan at Leicester followed in 2011, under his old mentor Eriksson, but it finished in January 2012, again because of injuries.

"I think injuries have underpinned everything that has been a problem to Michael," says Pearce.

Last year, the 24-year-old was prosecuted twice for drink-driving, leading to a three-year ban and £5,500 fine.

Following news of his release by City, Johnson revealed he had experienced mental health problems and spent time in The Priory Clinic, and asked to be "left to live the rest of my life".

Hamann has tried to make contact with Johnson and is reluctant to speculate on the cause of his problems, but is convinced injuries have played a part.

"I know how disheartening it is to return to action after a long time out, only to break down again," he says. "And I know it's lonely to be on the sidelines and not involved in training, and the banter that goes with it.

"Then there was the frustration of not being able to live up to his great potential, and all those predictions of greatness."

"You never know, if he gets his life back on track, he could still have a fine career," he says. "He is only 24 and has such incredible talent that I'd hate to think we won't see him play again."