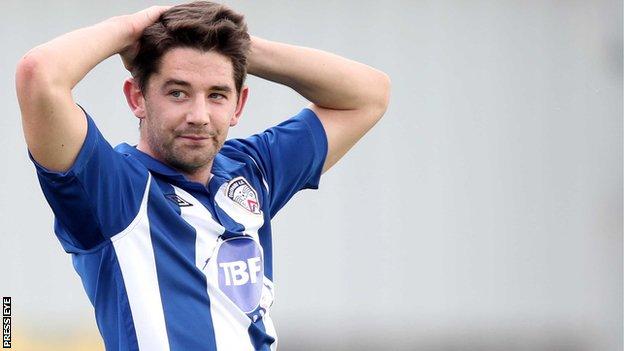 Curtis Allen will return to Coleraine's attack as the bruised Bannsiders attempt to get back on track after their 5-1 hammering by Ballinamallard.

The striker missed the midweek mauling because of a ban but he will be back to face his former club Lisburn Distillery at the Showgrounds on Saturday.

Manager Oran Kearney did not hold back on his criticism of the Coleraine display on Tuesday night.

"The manner of the whole second half was disgusting," he said.

Michael McNamee presents Saturday's Sportsound which is on from the earlier time of 12.30 to carry commentary of Ulster's final Heineken Cup pool game against Castres.

Jim Neilly is the commentator for the match which kicks-ff at 13.35.

That will be followed by comprehensive coverage of the Irish Premiership, and the planned commentary match is Portadown against leaders Cliftonville.

Sportsound is on BBC Radio Ulster FM & MW and the BBC Sport website from 12:30 GMT

Kearney's men will be expected to beat bottom-placed Distillery who have won just two of their 24 league games this season.

"They are good side - I feel they are in a false position in the league table given the personnel that they have," said Reds boss Tommy Breslin whose side are nine points clear of second-placed Crusaders.

"Their forward line rolls off the tongue - Braniff, Twigg, Murray. They are all scoring goals so we will need to be on our guard.

"But we have players who can score goals too and if we can come away with something I will be very happy."

With Lacroix requiring international clearance, Hyland is expected to be in the Crusaders squad for the Premiership clash with Ballymena United.

Gavin Taggart, who missed Ballymena's 2-1 win away to Glentoran on Tuesday, sits out the Seaview fixture as he is still suspended.

Glentoran, down to fifth after their midweek defeat by Ballymena, play Dungannon Swifts at the Oval while Ballinamallard take on Glenavon at Ferney Park.

Donegal Celtic's match against champions Linfield was postponed after a Friday afternoon pitch inspection while the game between Glentoran and Dungannon Swifts was called off on Saturday morning.