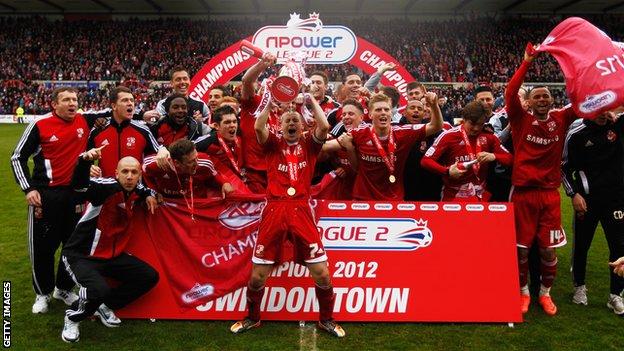 Swindon Town have been put up for sale in order to avoid administration, with debts thought to be around £13m.

The club's owner, Andrew Black, is unwilling to put in further funds, and is actively seeking fresh investment.

Around £9m could be wiped from the deficit owed to investors if they enter administration, but the club may then face a points deduction.

"That's why there's been a great deal of activity in the last few weeks.

Who is Andrew Black?

He was part of a consortium, led by ex-chairman Andrew Fitton, which took over Swindon in 2008.

Although rarely seen at the County Ground, his investment has put Town in the top 30 richest football clubs in England.

"We've had some positive talks and we're encouraged by the discussions."

When asked if he could guarantee the club could avoid administration for a third time in their history, Patey responded: "Not a single chairman in the country could do that."

He went on to say that Town are likely to appoint "professional advisors" to restructure their finances.

A reduction in the monthly playing budget at Swindon - which is believed to be in excess of £250,000 - is likely to be a priority, meaning League One's fifth-placed club could be forced to sell players.

And if entering administration is their only viable option, the Football League could impose a 10-point penalty.

When Paolo Di Canio was appointed as manager in May 2011, he was given substantial funds to add to the squad and last season the re-shuffle paid dividends, as he led them back to League One as champions at the first time of asking.

Di Canio went on to make seven signings over the summer but it eventually led to the club breaking Football League regulations by overspending on wages and fees, and they were given a month-long transfer embargo earlier this season.

Chairman Patey, who replaced Jeremy Wray the week after the embargo was sanctioned, said earlier this month that no money would be available for Di Canio to spend in the January transfer window.

He added: "The dream scenario is we'd be in the Championship with new investors and new owners, but there are a lot of other things that could happen too, and I do stress the money situation is extremely tight."

And on being told he may not be able to re-sign key loan players Chris Martin, Danny Hollands and John Bostock, Di Canio said he would be willing to invest up to £30,000 of his own money to keep them at the County Ground.

Owner Black was part of a consortium which took over Swindon in 2008.

A board meeting has been called for Saturday, with several external parties understood to be interested in purchasing the club.