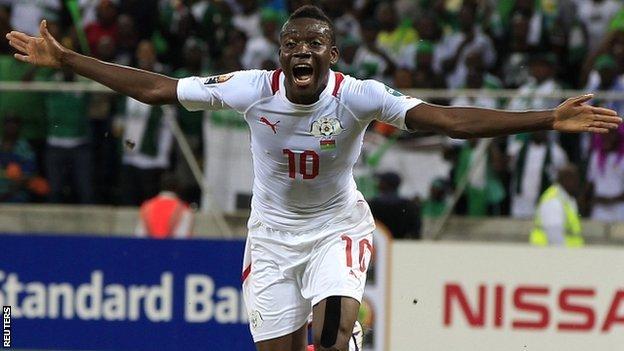 Ten-man Nigeria were held to a 1-1 draw as Burkina Faso scored with the last kick of their opening Group C match at the Africa Cup of Nations.

Ikechukwu Uche should have doubled Nigeria's lead in a second half which changed when Efe Ambrose was sent off.

The right-back, who usually plays in the centre of defence for club side Celtic, was dismissed after 75 minutes, picking up a yellow card in both halves after first impeding Aristide Bance before then pulling back the impressive Pitroipa, who dazzled with his footwork at times.

The Super Eagles, who could have taken the lead after 12 minutes, only for Brown to flash Ahmed Musa's pacy low cross over the bar, were ultimately made to pay for their profligacy in front of goal.

Nigeria dominated the first half as the Burkinabe failed to find their rhythm and took the lead when Chelsea's John Obi Mikel raked a pass forward to Brown, whose probing touch was stabbed home by the onrushing Emenike.

However, either side of a poor miss by Stallions captain Moumouni Dagano, who looked set to convert Pitroipa's cross only to mistime an attempted header, Stephen Keshi's side failed to profit from decent openings.

Uche was the most guilty party, controlling a low cross from the lively Ahmed Musa with a fine first touch only to blaze wide midway through the second half.

The substitute again showed a lack of composure nine minutes from time as he collected a Mikel pass before cutting onto his right foot and slashing wildly off target once again.

Nigeria had been hoping to banish memories of their last finals on South African soil, when they exited the 2010 World Cup in ignominious style, but they were left with the same sinking feeling at the end.

Deep into the fourth minute of added time, Pitroipa wriggled free down the right-hand side of the penalty box after a bright Burkinabe break and although his pullback lacked power, defender Godfrey Oboabona let it roll under his foot, allowing Traore to pounce.

The Lorient midfielder would have started the match but for a groin strain and while his side's barren run continues, with the Stallions having failed to win a Nations Cup match since hosting the finals in 1998, they have at least stopped a run of four straight defeats.

Searching for a first Nations Cup title since 1994, two-time champions Nigeria next face Zambia on Friday in Nelspruit, which is where Ethiopia and Burkina Faso will look to build on their unexpectedly positive starts.

"I am not going to let anything bring us down. I'm very proud of the boys, who did everything I wanted of them.

"This game is gone and the next game against Zambia is very, very important. I'll pick up the players and motivate them."

"All four teams have one point so everything is open. The performance today showed who Burkina are - we have quality in the team. We were missing some key players so I am very proud of what we did.

"I was confident of getting a point against Nigeria. This was a very good result for us and I am looking forward to the game against Ethiopia."